Seldom has Detroit seen anything to compare with the extravaganza that was unleashed when the 1937 Fords were introduced! The date was November 6, 1936, and Sales Manager William C. Cowling spared no effort in getting the new models off to a good start.

Some 41 special trains had brought 8,000 dealers to participate in the event. Representing all parts of the United States and Canada, they gathered at the Detroit Coliseum, newly decorated by the famed Walter Dorwin Teague. Music was provided by Fred Waring and his Pennsylvanians, then at the height of their popularity.

Following brief presentations by company officials, the lights were dimmed. Then a slim, brilliant shaft of light appeared, focused at center stage. There, all eyes fell upon a huge V-8 emblem, rising slowly through the stage on a special elevator.

Presently, the light broadened as a sprite -- a 12-year-old girl with golden curls -- untwined herself from the emblem. Running gracefully to one side of the stage, she summoned her fellow sprites, elves, and gnomes, who appeared suddenly from various side entrances.

A huge, boiling cauldron then arose at center stage, and, one-by-one, giant replicas of Ford V-8 parts, each representing some feature of the 1937 models, were exposed to the glare of the spotlight -- and tossed, then, into the steaming cauldron: a front fender, an instrument panel, various engine components, a radiator grille, a seat cushion....

Then suddenly, as colored lights illuminated the stage, the fumes vanished and the elves disappeared. A shiny Club Coupe, a newcomer to the Ford line for 1937, rose up, circled the stage, and made its way down a ramp to the main floor. It was a spectacular way for an automobile company to present its new product line, and a revolutionary concept in merchandising.

The truth is, Ford needed a flashy presentation if it wanted to capture the public's attention, for 1936 had not treated the company kindly despite increased production. After beating Chevrolet handily during the 1935 model year. Ford slipped behind Chevrolet in 1936, with sales falling behind those of its arch rival by more than 23 percent.


This, of course, seems strange to today's hobbyist, for the 1936 Fords -- particularly the open styles and the three-window coupes -- are highly prized by collectors, commanding as much as half-again the price of comparable 1936 Chevrolets on the collector market. But there it is!

In any case, several factors accounted for Ford lagging behind. For one thing, a seamless steel "Turret Top" had been featured by all 1936 Chevrolet models, save only the Standard cabriolet. For another, the Master series offered the comfort of independent front suspension -- company Hacks called it "Knee-Action" -- at no additional cost, while Ford clung to the traditional solid I-beam axle, suspended by means of a transverse leaf spring, just as it had been in the days of the Model T.

But Knee-Action wasn't new for 1936, and neither was the Turret Top, features that had already appeared, respectively, on Chevrolet's 1934 and 1935 Master models. What was new that year was the Chevy's brakes.

Thanks, in some measure, no doubt, to a highly effective advertising blitz by fast-rising Plymouth, the public had awakened to the advantages of hydraulic "juice" brakes, which by 1936 had been adopted by nearly every American automaker -- Pierce-Arrow, Willys, Lincoln, and Ford being the exceptions.

For more on the 1937 Ford lineup, continue on to the next page. 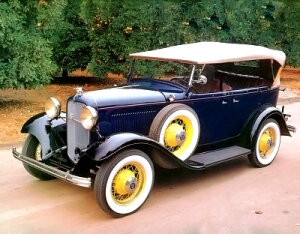