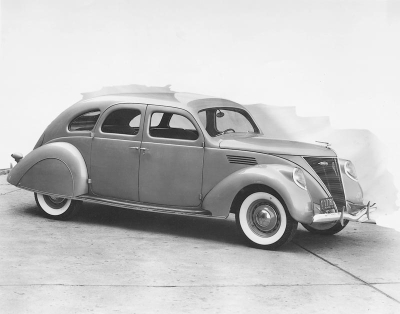 The 1936 Lincoln Zephyr was a radical departure from previous Lincoln styling.

What pulled Lincoln through the Depression was the Zephyr. It burst on the scene for 1936 as a medium-price product of the sort Cadillac and Packard also relied upon for survival, but was far more advanced. Its major design concepts evolved from a series of radical unit-body prototypes designed by John Tjaarda along aircraft principles and built with help from Briggs Manufacturing Company, eager to win some volume body business from Lincoln. Tjaarda's original design featured a rear-engine layout, but this was switched to a conventional front-engine/rear-drive format.

The rest of the Zephyr was unconventional. Tjaarda claimed this was the first car in which aircraft-type stress analysis proved the superiority of unit construction. And indeed, at around 3300 pounds, the Zephyr was lighter than Chrysler's body-on-frame Airflow, yet much stiffer. Best of all, unit construction offered important cost savings.

A modified Ford flathead V-8 with about 100 bhp was initially slated, but company president Edsel Ford decided that, as a Lincoln, the Zephyr had to have a V-12. As the existing 414 was too large for this smaller package, engineer Frank Johnson, one the ablest in the industry, was told to add four cylinders to the Ford V-8. Cost pressures, however, compromised the result. A four-main-bearing L-head unit of 267 cid, the Zephyr V-12 employed a "monobloc" casting similar to the V-8's, with an exhaust cored between the cylinders. Initial horsepower was unimpressive for a twelve at only 110. The rest of the drivetrain was also derived from Ford V-8 components.

Zephyr styling was similar to that of Tjaarda's prototypes, but a pointy rear-hinged "alligator" hood and matching Vee'd radiator were grafted on under Edsel's direction by Ford stylist E.T. "Bob" Gregorie. The changes made for a much prettier car than either Tjaarda's prototypes or the curved-nose Airflow, yet the essential shape remained more slippery than the Airflow's even though it wasn't "styled in the wind tunnel" like portions of the Chrysler design.

Briggs built most of the Zephyr. Ford only installed the drive­train, added front sheetmetal, and saw to trimming and painting. Edsel laughingly told Tjaarda that Briggs might as well build the whole thing, as the Zephyr assembly line was only 40 feet long!

Designated Model H, the Zephyr bowed as a two- and four-door sedan on a 122-inch wheelbase. Prices were attractive at around $1300, and performance was at least decent. Top speed was over 87 mph, and a 4.33:1 rear axle, chosen for low-end acceleration over all-out speed, made for 0-50 mph in 10.8 seconds and 30-50 mph in six seconds flat. Yet mileage ­consistently averaged 16-18 miles per gallon.

With all this, the Zephyr was an immediate hit. Nearly 15,000 were sold for '36, better than 80 percent of Lincoln's total model-year output. That boosted the make to 18th on the industry production card -- the first time Lincoln broke into the top 20. Sales for the 1937 HB models came to nearly 30,000 despite few changes, though a three-­passenger coupe and division-window Town Limousine were added.

The 1938 Zephyrs bowed with a three-inch-longer wheelbase and revised styling announced by a "mouth organ" grille that beat everyone to the next design trend: the horizontal front-end format. Two- and four-door convertibles arrived. A Custom interior option provided additional model variations for 1939. A deep recession limited 1938 sales to just over 19,000 -- though that was still some 5500 more than Cadillac managed with its LaSalle. The '39 total was more encouraging at nearly 21,000, but might have been higher had it not been for intramural competition from the new medium-priced Mercury.

Zephyr mechanical alterations before 1940 followed those of other Ford Motor Company cars. Old Henry's stubbornness precluded hydraulic brakes until '39. An optional two-speed Columbia rear axle came along, reducing engine speed by 28 percent in its higher cruising ratio. The V-12 was modified to cure several persistent problems. Water passages, for example, proved inadequate, leading to overheating, bore warpage, and excessive ring wear. Inadequate crankcase ventilation created oil sludge buildup, and oil flow was poor. Yet despite the addition of hydraulic valve lifters for 1938 and cast-iron heads after '41, the powerplant never shed its poor reliability image. Had World War II not intervened, it might have been fully reengineered. But it wasn't, and many collector/owners have since replaced the V-12 with L-head or later overhead-valve V-8s.

With no change in wheelbase or basic appearance, Zephyr was fully rebodied for 1940, gaining sealed-beam headlamps, larger windows and trunk, bodysides bulged out to cover the running boards, and a more conventional dash. A larger bore brought the V-12 to 292 cid and 120 bhp. The slow-selling convertible sedan was discarded. Among Custom-interior closed models was a special five-passenger "town limousine," a four-door-sedan conversion by Briggs. Brunn also built 10 Zephyr town cars in 1940-41 (three of which went to the Ford family); all were heavy-looking rigs with rooflines that didn't match well with the chiseled lower body. Zephyr production again inched upward, reaching just over 21,750.

But Lincoln had bigger 1940 news. It was, of course, the Zephyr-based Continental, one of the most-stunning automobiles of all time.