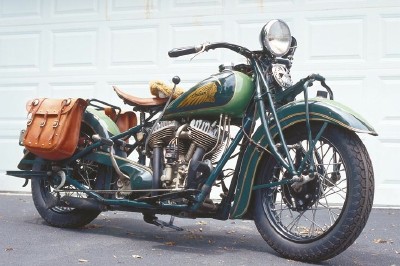 The 1935 Indian Chief wasn't agile around town, but came into its own as speed increased. It has a sort of brutal beauty born of purpose. See more motorcycle pictures.

The 1935 Indian Chief motorcycle competed directly with the Harley-Davidsons of the day and was one of Indian's top sellers.

The 74-cubic-inch Chief was anything but graceful in slow-paced maneuvers, its suspension design, long wheelbase, and 480-pound curb weight conspiring to make it feel clumsy around town.

Once up to speed, however, these same features provided exceptional stability. Buyers of a 1935 Indian Chief motorcycle were faced with a wide variety of options. Color choices were reduced that year to 13, though an extra $5.00 would buy any hue DuPont offered.

A four-speed transmission could be ordered to replace the standard three-speed. New to the 1935 version were redesigned fenders with larger valances to smooth out the styling, and a rebound spring for the ungainly front leaf suspension that helped smooth out the ride somewhat.

Chiefs still lacked any form of rear suspension, though they did offer a spring-loaded seatpost.

Go to the next page to see pictures of the 1935 Indian Chief motorcycle. 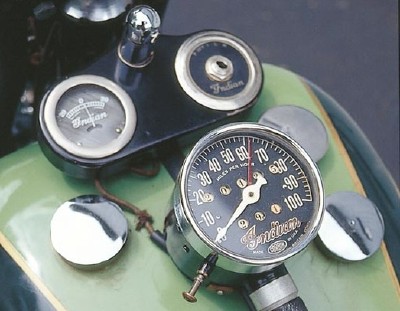 Though the 1935 Indian Chief could be clumsy and heavy at low speed, its power and high-velocity stability were assets once the throttle opened up.

The 480-pound Chief had no rear suspension, but did offer a spring-loaded seatpost.
A variety of options were available on the 1935 Chief, including three types of trim for the fuel tank.
The rather awkward front suspension gained a rebound spring for 1935, and fenders were restyled with larger valances to smooth out the Chief's styling.