Keep Your Belts On 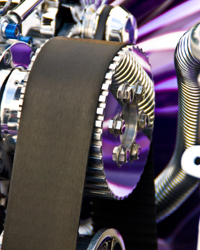 If your belt breaks while you're driving it can cause major damage to the engine.
© iStockphoto.com/Les DeFoor

No we're not talking about dressing etiquette. We're talking about the rubber belts on your engine that run all sorts of vital components. The function of a belt can vary from car to car, but some of their main responsibilities are running the fan, water pump, alternator and air conditioner. You don't need to know what all those things are, but you do need to know that the belts on your engine run at least some of them.

If your engine is on then your belts are running. In other words, they get a lot of use. They typically last a very long time, but eventually they will start to show signs of wear and begin to crack. If your belt breaks while you're driving it can cause major damage to the engine. Check your belts by turning them over slightly to see if they have any visible cracks in them. A squealing or spinning belt may also indicate that it needs to be adjusted or replaced. Stay on top of your belts and you'll ensure your car is runs a whole lot smoother -- and longer.