by Christopher Neiger
Prev NEXT
7 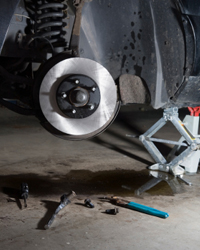 It's a good idea to occasionally check under the car to see if anything is leaking onto the pavement below.
© iStockphoto.com/Andrew Reese

You don't have to be a mechanic to spot a leak. In fact, sometimes you don't even need to see it -- you can just smell it. Oil and antifreeze are the two main fluids you want to make sure aren't leaking out of your engine.

Intense heat and pressure will eventually cause engine hoses to fail. Rubber engine hoses that are old and cracked can leak antifreeze or other fluids that your engine requires. Other areas that often leak are where two parts join together with a rubber seal and silicon. Over time, these seals can break down and allow oil or other fluids to leak out of the engine or cause them to leak fluid into the wrong areas of the engine.

It's a good idea to check under your hood to see if you see or smell anything leaking from the engine. When you park your car, occasionally check under the car to see if anything is leaking onto the pavement below. If you can stay ahead of a minor leak and have it taken care of before it turns into a major problem you could save yourself a big headache later on.