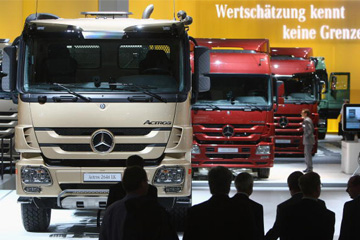 Germany in the late 1940s was a pretty tough place to call home. The Second World War had just drawn to a close, and the country suffered a defeat that devastated its entire infrastructure. Roads, factories and whole cities lay in ruin. As such, Germany needed a vehicle that could step up to the plate and perform the tremendously hard task of rebuilding the country.

The company that came up with a solution was Mercedes-Benz, and the vehicle they created was called the Unimog. The Unimog, short for Universal-Motor-Geraet or Universal Motor Implement in German, was an extraordinarily capable truck that could go just about anywhere and do just about anything. Originally built for agricultural purposes, the Unimog grew into an industrial and military vehicle that gained a sizable following all over the world and continues to be built today.

It's more than just a big truck. The modern Unimog is a high-tech, all-wheel-drive beast that eats muddy roads, big hills and river rapids for breakfast. It's used by everyone from farmers to the Special Forces, and it even has a cult following in North America despite having to be specially imported here.

To quote Mercedes-Benz: "Over the decades the Unimog has long proven its worth as a hard-working jack-of-all-trades all over the world. Its basic concept has remained unchanged: great versatility for assignments of every kind, extreme off-road capabilities by virtue of all-wheel drive, portal axles and differential locks -- at front and rear -- a compact cab, great robustness and provisions for mounting a wide variety of working implements" [source: Mercedes-Benz].

In this article, we'll examine the decades-long history of the Unimog and look at how it has evolved from a tough farm truck into one of the most versatile off-roaders on the planet. We'll also learn about the incredible technology Mercedes-Benz builds into these trucks so they can live up to their reputation of being able to handle anything. 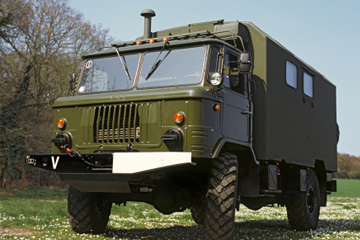 After World War II ended, the plan the Allied Powers devised for restructuring Germany was to make it a primarily agricultural country -- heavy industries were to be eliminated in order to keep the nation from building weapons of war again.

To that end, a Daimler-Benz engineer named Albert Friedrich began to develop a new type of tractor that differed greatly from conventional farm vehicles. The first Unimog prototypes were created in 1947, and featured a sloping hood with a canvas roof, a pickup-truck bed and massive tires. Large-scale production began in 1948 [source: Unimog International].

By the 1950s, the industrial restrictions on Germany were lifted, and many began to see the Unimog's potential beyond the farm. The vehicle was used as a bus, as military transportation and as a construction vehicle. Over the years Mercedes added more powerful diesel engines and more sophisticated technology, like synchronized transmissions and better four-wheel-drive systems.

As the vehicle's popularity increased, so did its model range. By the 1960s Mercedes was selling a variety of Unimogs in different sizes for different purposes. The tall, flat-nosed vehicles came as pickup trucks, tractors, industrial vehicles and other configurations.

Though relatively compact compared to, say, an 18-wheeler semi truck, by the 1980s the Unimog sported two or three axles, a 240-horsepower engine (about 10 times the power output of its original powerplant!) and a gross-vehicle weight rating of between 4 and 14 tons (3,629 and 12,701 kilograms) depending on the model.

Not long after the vehicle's 50th birthday, new Unimogs were unveiled for even more purposes, such as forest firefighting and disaster aid. Today, Unimogs can be purchased new in several different body sizes and can be customized with different attachments. They also sport a variety of transmissions and extremely powerful, low-emissions diesel engines.

Up next, what makes the Unimog so successful that it's been in production since the 1940s? The answer: impressive technology that makes it worthy of wearing a Mercedes-Benz star on its grille. 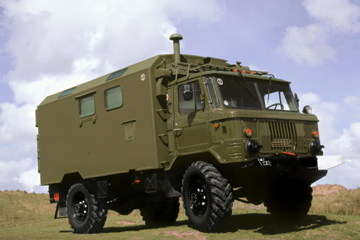 A different view of the GAZ-66
Steve Taylor/Getty Images

Versatility has long been one of the Unimog's strongest suits. Whether it's hauling, crossing impassible terrain or heavy farm work that's needed, there's a Unimog that has the right size and equipment for the job. There is no such thing as a standard Unimog -- each one is built to the customer's specifications [source: Rocky Mountain Moggers].

The current Unimog lineup comes in three flavors: the compact U20, billed as being one of the most maneuverable four-wheel-drive commercial vehicles available; the mid-size U300, U400 and U500, which range between 10 and 14 feet (3 and 4.3 meters) long and include the luxury "Black Edition" off-roader; and the heavy-duty, 17-foot (5.2-meter) long U4000 and U5000 with all-wheel-drive capabilities that can take it anywhere [source: Unimog International].

The front cab is small and stub-nosed, leaving the back part and sides of the vehicle to be customized with attachments like a truck bed, loading crane, wood chipper or even a street sweeper. Unimogs feature attachment areas on their bodies with hydraulics that can operate snowplows and grass mowers. There are literally thousands of ways to customize a Unimog to suit any task. In addition, they're designed to carry a variety of tools in numerous compartments.

The Unimog is powered by a direct-injection, turbo diesel four- or six-cylinder engine with loads of torque, featuring Mercedes' emission-reducing BlueTec system. The engines can switch between "driving mode" and "working mode" for maximum smoothness and fuel efficiency. Transmissions are just as sophisticated, with an available planetary automatic gearbox and a transmission with eight forward gears and as many as eight reverse gears so it can move big loads in any direction. They can also travel at speeds of 55 to 60 miles per hour (88.5 to 96.6 kilometers per hour) [source: Unimog International].

More features include hydraulic devices that can be operated by simply plugging them into stations on the Unimog's body, and equipment that lets the driver control tire pressure at the touch of a button -- this keeps the vehicle from sinking into soft surfaces.

We've seen how technology and customization have made the Unimog a popular vehicle. But who uses a Unimog? In the next section, we'll examine the people who put Unimogs to work -- and play -- all over the world. 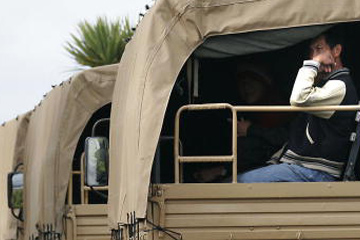 Unimogs have gained fans from all over the world. So far, they haven't been very common in North America, however, due to a lack of dealers on this side of the pond. However, many Unimog fans can import the vehicles through various channels. People buy them used and go on outings with other Unimog owners, such as the members of the Rocky Mountain Moggers in the United States. Many people use them as recreational off-road vehicles, too [source: Rocky Mountain Moggers].

In Europe, Africa and Asia, Unimogs are purchased by governments and businesses as construction and hauling vehicles. They're also quite common in the military. The British Special Boat Service uses them to get across rugged terrain, and the German army employs the trucks as haulers of people and equipment.

So where can someone in the United States buy a Unimog? As with all things, the Internet has made it easier than ever. Web sites like Unimogsales.com sell a variety of models, including military trucks, snow plows, crane-equipped 'Mogs and firefighting units. Older ones can be bought from sites like ClassicUnimogs.com.

Some of the Unimogs listed on these sites and others may need to be imported from other countries, while others found online are already located in America. Lots of domestic ones can be found on the Unimog Exchange, a kind of Craigslist for the vehicles.

Like the versatile Unimog itself, if you want one, you have a lot of options to get one depending on how much you're willing to pay for it. Just be ready to answer lots of questions from curious motorists the next time you fill up its gas tank!

For more information about Unimogs, trucks and other related topics, follow the links on the next page.