How the Popemobile Works 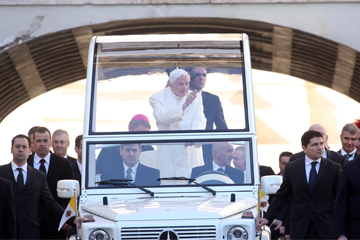 Pope Benedict XVI waves to the faithful as he arrives in St. Peter's Square for his final general audience on Feb. 27, 2013 in Vatican City, Vatican.
(Franco Origlia/Getty Images)

Pope Francis I used to take the bus. But back then, the denizens of Buenos Aires called him Father Jorge. His colleagues knew him as Cardinal Jorge Mario Begoglio. As the top-ranking Catholic around, he was entitled to cruise around in a chauffeured limo. But he was a simple guy; anecdotes suggest he liked making friends on the bus and people recognized and appreciated his humility.

Pope Francis I, who was elected on March 13, 2013, spent the first few days on the job being a bit stubborn -- he opted out of his first ride in the popemobile, a heavily modified Mercedes, so he could hang out with his cardinal buddies on the bus they'd all used to arrive at conclave. The next day, he again bypassed the popemobile in favor of a much less aggressive German-engineered car: a Volkswagen [source: Palmo]. His election was a surprise to pretty much everyone, and the Vatican's spokespeople seemed more amused than annoyed by his actions.

Whether or not it'll last, well, that remains to be seen. The papacy is clearly a more demanding job than being a cardinal, and it comes with the additional stress of stricter security standards. The Catholic Church has hinted that even Pope Francis agrees -- under such circumstances, an armored Mercedes isn't an extravagance. It's actually reasonable. Once Pope Francis becomes more accustomed to his new surroundings (and realizes that the public transit options in Vatican City are a bit limited) perhaps he'll acquiesce.

Of course, the Mercedes in question is just the latest in a long line of safe, cushy rides ... but it does need to be said, though, that Pope Francis is not the first pontiff who's had a fondness for VWs.

Any Color You Like, as Long as It's Vatican Mystic White

Most armored cars go for subtlety and try to blend into the crowd, but the popemobile happens to be pretty conspicuous. Although the Pope seems awfully exposed in his greenhouse-like glass bubble, those windows and body panels are bulletproof. And the entire underbody is bombproof, too. (And all those rappers in armored G-Wagens think they're important.) Mounted on the back of a Mercedes M-Class SUV, the current version of the Pope's transport chamber is boxed-in with larger glass panels than its predecessor. Another new feature for the 2012 model is that the Pope is illuminated -- literally -- by lighting that's integrated into the roofline that casts downward on His Holiness. A swanky white leather interior lends a heavenly touch, and the seat is embroidered with the papal coat of arms. The throne itself is mounted on a hydraulic lift for easy entry and exit.

It takes a lot of power to haul around a heavy armored vehicle, so a ML430 V-8 engine sits under the hood, and while the Pope's motorcade usually travels at ceremonial, parade-like speeds, it's capable of reaching 100 miles per hour (160.9 kilometers per hour). That level of customization carries a hefty price tag, but it doesn't cost the Catholics anything. The end result is a gift to the Vatican from Mercedes, a long-standing tradition. At a cost of about $500,000 (plus nine months of design and assembly) it's a rather pricey present -- but that kind of publicity just can't be bought.

And what happens when the Pope's busy schedule requires tighter turnarounds or an intercontinental jump, and a typical road-bound vehicle just won't cut it? The official popemobile is schlepped around to accommodate the Pope's travels. So Mercedes lowered the chassis a bit, to make it easier to pack up and move around the world [source: Undercoffler].

The current popemobile was built in 2012; but the previous popemobile had been in service since 2002. They have a lot of common features, however, which help illustrate what the Vatican has come to expect for its official papal transport. Mercedes has been the Vatican's supplier of record since the 1930s. They have a distinct advantage in this type of market because Mercedes is actually equipped to armor vehicles at the factory (and they're in limited company -- not many carmakers would be able to make a return on this kind of investment by servicing the secular population).

Security requirements being what they are, popemobiles are made to resist assault or ambush, a Mercedes specialty. It's an impressive feat, especially considering all that glass. Popemobiles are easily recognized for the telltale bulletproof glass platform on the back, where the Pope can be seen by onlookers, but that's not a guarantee since there have been exceptions to the rule. Oh, and we should mention that only the official popemobile gets the papal seal on its doors.

Popemobiles are generally finished with a lovely, regal red carpet to class-up the Pope's entries and exits, and a white leather interior. Mercedes even has an official exclusive paint color -- Vatican Mystic White. No official specs on rim size or in-dash electronics are available ... but even still, the most recent of popemobiles have definitely evolved in style.

A Dossier of Holy Rollers 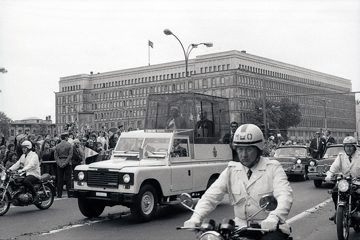 This was Pope John Paul II's second pilgrimage to Poland (in 1983). The popemobile is passing in front of the PZPR (Polish United Workers' Party) building in Warsaw.
(Forum/UIG/Getty Images)

Not all popemobiles have come from the same mold (and plenty weren't even white -- that's a recent trend). According to Jalopnik, there weren't rigorous standards for popemobiles until Pope John Paul II was shot right in St. Peter's Square and the Vatican realized the need for better security. Until 1981, an unofficial popemobile was often slapped together by whatever country the Pope happened to be visiting and the gesture was graciously accepted for the duration of the stay [source: Wojdyla]. An assassination attempt on one's own home turf, however, could understandably inspire one heck of a "Come-to-Jesus" meeting, and from then forward, an official rig from the Vatican fleet accompanied papal travel at all times.

In the 1970s, things got a bit more interesting as popemobiles began to vaguely and gradually resemble more modern versions. When a Polish cardinal took the lead (we know him as John Paul II) he helped design a rolling throne based on an FCS Star (a Polish truck that was mostly used for firefighting, but looks more like a troop transporter). The FCS Star was groundbreaking for its elevated platform and broad white exterior panels. A modified Ford Transit truck continued this theme.

Then Mercedes jumped on the white truck trend in 1980, providing a G230 truck with a glass-enclosed rear platform and a Peugeot truck followed suit in 1981. The year 1982 saw three new popemobiles: a Seat truck, a Range Rover (noteworthy for being the first bulletproof popemobile design) and a Leyland heavy-duty truck for travel around the United Kingdom. A GMC Sierra and another Mercedes limo (the first to be fully armored) rounded out the decade.

There have been bigger time spans between new cars in more recent years. The 1990s were rather uneventful: yet another Mercedes limo (a drop-top, this time!) and a bus furnished for a trip to Mexico. In 2002, the Vatican received a Mercedes ML 430, fully bulletproof with the now-standard glassed-in platform. Along came a Fiat Campagnola in 2004, but that was limited to Vatican City travel due to its lack of enclosure. Then in 2007, the Vatican requested a popemobile that could be converted from full-security to open-air. A Mercedes G500 SUV was modified with a folding windshield and handrails so the Pope could catch a nice breeze.

Pope Benedict XVI (who resigned in February 2013) was very concerned about the environment, so in 2012, he had an alternative popemobile modified from an electric Renault Kangoo Van ZE. The Renault's glass chamber wasn't bulletproof, but the Pope used it mostly when vacationing in Castel Gandolfo, a coastal town about 15 miles (24.1 kilometers) from Rome, where security protocol was a bit less severe [source: Torchinsky]. And at the end of 2012, Mercedes brought in the latest popemobile (described on the previous page). What a sweet gift -- and just in time for Christmas, too!

Though a bit cumbersome to summarize, the confusion about official and unofficial popemobiles can lead to some entertaining lore. One popemobile urban legend tells the story of a humble fourth-generation Volkswagen hatchback. Before Pope Benedict XVI was elected, he owned a VW Golf he'd bought new in 1999. (See? Popes do love VWs!) When he took the papacy in 2005, he sold it. So the famous Golf was never an official popemobile, popular to contrary belief -- it was owned by the cardinal, not by the Vatican, and it didn't come close to satisfying a popemobile's (rather flexible) security checklist. Even though the little Golf was eventually acquired by an online casino for publicity purposes and then relisted for sale in February 2013, chances are slim that it'll land back in the former Pope's driveway. For one thing, he probably can't afford it anymore (the casino is hoping to get at least £127,000); for another, he's 85 years old now and really hasn't had the need to drive himself anywhere for almost 10 years. It's been centuries since anyone else has left the papacy, so there's no precedent for how a former pope gets around town. We'd guess the Vatican can probably spare a gently-used Mercedes limo and a driver.

Author's Note: How the Popemobile Works

When I started researching this story, I was surprised to discover that "popemobile" is actually the preferred term for the official papal transport. I'd heard the word before, of course, but always assumed it was a tongue-in-cheek, colloquial term. For lack of anything better to call it, I suppose. But really, how ... undignified. Even the simple term "Presidential Limo" has a lot more panache (even if it does sound like the name of a fly-by-night chauffeur service).

Can't Mercedes come up with one of their super-clever combinations of letters and numbers? The outgoing PB-XVI could get a model year upgrade to PF-I -- or something like that, anyway. It just seems like the Vatican -- no strangers to gilding the lily -- could do a little better ... but that's enough pontificating, for now.

Could Electric Motor Conversions Save Classic Cars?
Henry Ford vs. the Dodge Brothers: An All-American Feud
How Excalibur Cars Work