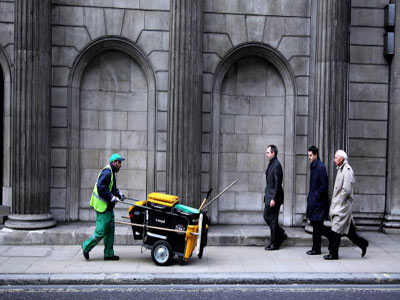 An old-school street-sweeper at work in front of London's Bank of England.
Gareth Cattermole/Getty Images

­Mechanical street sweepers aren't as old as the streets they clean, but it might surprise you to learn that they do predate the automobile. Like many inventions devised during the Industrial Revolution, the street sweeper's actual parentage is a bit unclear. Some sources claim C.S. Bishop invented a mechanized street sweeper in 1849, while others say C.B. Brooks, inventor of the paper hole puncher, came up with his street sweeper truck in 1896.

In any case, by the time the automobile became widely available in the U.S. in the early 20th century, street sweepers were already on the scene and keeping things clean. Officials for the city of Boise, Idaho, bought the first Elgin street sweeper in 1914, and the Illinois-based company has been in business ever since.

­The first mechanical street sweepers may have predated the automobile, but they would have relied on horse-drawn carts to move about the city. The street sweeper truck ushered in the use of horseless carriages (you might know them as cars) to move the street sweeper around town. As technology has improved and environmental concerns have become more important, street sweepers have become quieter, cleaner and more efficient. Some are even using alternati­ve fuels as we continue on into the 21st century.

Uses of street sweepers have expanded along with the technology. City streets, construction sites, airport runways, never-ending parking lots -- if it's paved, it likely needs to be swept. There are portable little sweepers that can be towed to a work site and indoor versions that keep the cement floors of massive warehouses and industrial sites clean.

Now that we know where they came from and how they're used, let's learn how street sweepers actually work.