How does a jet truck work? 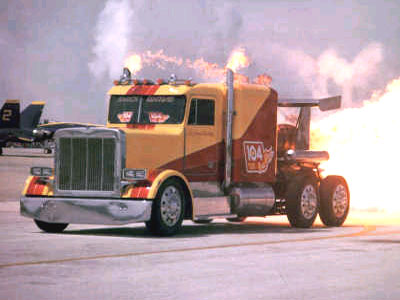 Shockwave, a triple jet-engine truck on a 260-in­ch (660-cm) wheelbase, holds the Guinness­ record for jet-truck speed at 376 miles per hour (605 kph). Driving on a runway, Shockwave races airplanes that are flying above it at 300 miles per hour.

Shockwave uses three Pratt & Whitney J34-48 engines, also used in the U.S. Navy's T2A Buckeye plane. The engines are arranged in a pyramid formation, tilted at a three-degree angle to help keep the 6,800-pound (3,084 kg) truck on the ground.

The engines produce a total of 36,000 horsepower and 19,000 pounds of static thrust. The outlet of the engine is fitted with a special fuel line that carries raw diesel fuel to a ring-like burner inside the outlet. This dumping of raw diesel fuel into the burner creates flames and smoke that make for some very special effects.

The front of the truck is the only stock part, an original 1985 Peterbilt cab.

Hand-fabricated dashboard in a stock 1985 Peterbilt cab. Above the steering wheel is a zero to 300-mph airspeed indicator.

The familiar twin vertical chrome exhaust stacks are modified with piezoelectric ignitors for lighting the raw diesel fuel to produce flames. This truck consumes 400 gallons per mile during a race. If the afterburner mode is used, the fuel is consumed even faster.

The exhaust stacks are fitted with piezoelectric ignitors. The horizontal, metal shield prevents the cab-roof paint from burning.

Shockwave uses conventional truck tires. However, they shave 85 pounds of tread off each one to reduce the weight (mass) of the tire and to keep the tread from separating and flying off when traveling at 300 mph. All-wheel, large-diameter disc brakes are used on each wheel.

Aircraft-type parachutes are used to slow Shockwave down at the end of a run.

Shockwave jet truck cools down after an exhibition run. Note the parachute-storage tube visible beneath the rear spoiler.

In a typical show, an aircraft approaches the jet truck from behind, flying at about 200 mph (321.8 km/h). The Shockwave jet truck accelerates from zero to 300 mph in about 11 seconds in an attempt to catch up with the plane overhead.