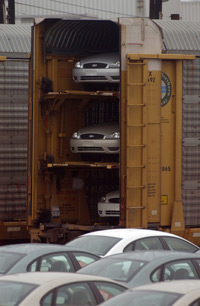 Although the majority of vehicles assembled in North America will travel by rail, autos collectively make up a very small percentage of overall rail-cargo transport in America. The Association of American Railroads reports motor vehicles made up just 1.6 percent of all railroad tonnage transported in 2007 [source: Association of American Railroads Class 1 Railroad Statistics].

Rail can move large numbers of vehicles efficiently. Specially designed rail cars called auto racks have two or three decks and can carry up to 20 vehicles, although the average is around 12 units. Two-deck auto racks usually carry trucks and large SUVs while three-deck auto racks carry cars. A dedicated auto-transport train with 70 auto racks can therefore carry more than 800 vehicles [source: CSX]. The average rail journey for a new car is about 1,300 miles [source: Lowe].

Vehicles are usually loaded onto auto racks at the assembly plant. In some situations, new vehicles are trucked to a loading dock at the rail yard. Special ramps allow the cars to be driven onto a railcar's decks. The cars are then secured with wheel chocks that are locked in place on the decks.

The latest design in auto racks is the Auto-Max, which was developed by the Honda and Greenbrier companies. The multi-level Auto-Max can hold up to 22 vehicles and support both cars and trucks by maximizing the space between the railcar's axles. Honda ordered a fleet of 400 Auto-Max railcars and says it has the highest rail-shipping rate of any automaker at 82 percent [Source: Honda].

Ever worry about a car falling off an auto-transport trailer that you're following on the highway? You can learn how to avoid that catastrophe on the next page.