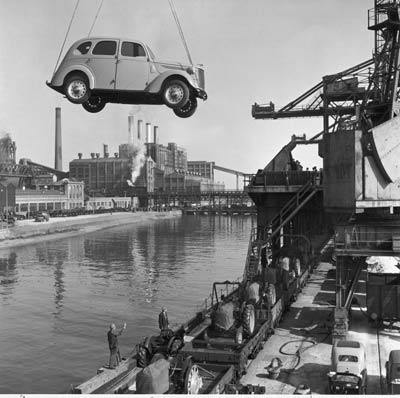 A car is loaded onto an English ship for export. This type of auto transport works well for foreign and exotic cars.
B. Anthony Stewart/National Geographic/Getty Images

Vehicles can be transported by airplane, large ship, railroad car or truck.

While the president's limousines are airlifted by an Air Force C-5 Galaxy cargo plane for all of his trips outside Washington, D.C., very few personal vehicles are transported by airplane. The exceptions may include exotic collector cars, racecars or one-of-a-kind concept vehicles scheduled to appear in a major auto show [Source: Havely].

Car-carrying ocean vessels have been built to hold up to 8,000­ vehicles, although most are designed to transport between 4,000 and 5,000 vehicles. These ships are used to bring foreign-built cars and trucks to the United States [source: Ships and Yacht Information]. For example, Toyota will import about 1.1 million vehicles to America from Japan in 2008. Toyota can charter or contract up to 30 ships to serve the American market. The automaker relies on five ports, two on the East Coast and three out West, where the vehicles are unloaded for transport to the dealer by truck or rail [source: Nelson].

Automakers estimate that 65-70 percent of all new vehicles sold in the U.S. will travel on rail before an 18-wheeler auto transport tractor-trailer makes the final delivery to the dealer. The average distance for truck transport falls within a 250-mile radius of the pickup point. Longer routes then become more cost effective by rail. Of course, rail has its own limitations in destination locations and specialized equipment required to load and unload the vehicles [Sources: Nelson and Lowe].

We've learned how vehicles are carried from one destination to the next. On the following page, we'll look at the advantages and challenges of rail transport.

That's a Lot of Postage Stamps

London-based newspaper The Sun reported in late July 2008 that a wealthy resident of Qatar paid about $42,000 to have his Lamborghini LP640 airlifted to London -- for an oil change. Environmentalists were outraged over the 6,500-mile weekend round trip, citing the huge carbon footprint left behind. The oil change itself reportedly cost only $6,500 [Source: Syson].