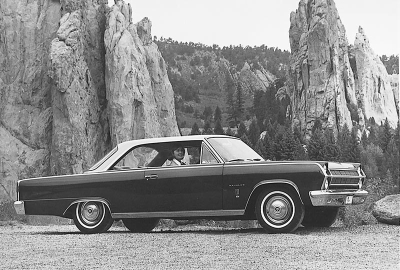 For 1965, the Rambler Ambassador came in both hardtop and convertible models. The Ambassador 990-H Hardtop Coupe is shown here.

All 1965 Ramblers were advertised as "The Sensible Spectaculars," but that fuzzy logic applied mainly to a much-revised Classic and Ambassador. The former wore a new convex "dumbbell" grille, recontoured hood, and a longer, squared-up rear deck.

A convertible appeared in the 770 series, where Typhoon returned, this time as the 770H. Engine choices widened with an optional 155-bhp, 232-cid six and Ambassador's two 327 V-8s. The 770H became a Rebel for '66, when a light facelift featured new grilles and minor trim, a "crisp line" hardtop roof, and a reworked rear end for wagons.

Because the '64 Ambassador sold no better than the '63, the premium Rambler reverted to its own longer 116-inch wheelbase for 1965. Also back was an 880/990 lineup that included a pillarless 990H. Standard power was now the 155-bhp 232 six. The base V-8 was that year's new 287, with optional 327s, as before. An outer-sheetmetal redo bestowed rectilinear lines reminiscent of the Classic, plus a Vee'd bilevel grille and vertically stacked quad headlights. Ambassador also followed Classic in '65 by offering its first convertible, a 990. Trunk space improved on all nonwagon models, but passenger room didn't because the extra wheelbase length was again ahead of the cowl. There were no huge changes for '66, when Ambassador became a separate AMC "make."

Also new for '65 was the Classic-based Marlin, a fastback to battle Ford Mustang and Plymouth Barracuda in the burgeoning sporty compact wars. A sweeping pillarless roof tapered down and inward at the back, and elliptical rear side windows helped keep it light-looking. This treatment had been previewed on a 1964 show car called Tarpon, based on Teague's new American, which carried it much better. Teague suggested a showroom version. Abernethy agreed, but insisted on besting rival 2+2s with a "3+3." Thus was Marlin molded on the Classic instead -- and suffered ungainly overall proportions from that car's fairly stubby hood. This likely explains why the new image-maker sold none too well despite decent performance and a reasonable $3100 base price. Only 10,327 were produced for '65, after which Marlin sold with diminishing success as its own "make" for two more years.

Bidding an outrageous farewell to the Rambler name was the limited-edition 1969 SC/Rambler. This was basically a Rogue hardtop carrying a big new 315-bhp, 390-cid V-8, a working hood scoop, a four-speed manual transmission with Hurst shifter, heavy-duty suspension, and a cartoonish red-white-and-blue paint job. Priced at $2998, the "Scrambler," as it was inevitably nicknamed, was hardly sensible in the Rambler ­tradition, but it was a pretty spectacular junior muscle car. Published road tests confirmed AMC's claim of standing ­quarter-miles in the low 14s at around 100 mph. From rest, 60 mph came up in a reported 6.3 seconds. Production was only 1512, though that was triple the planned run.

Not many Rambler convertibles were built, no surprise given AMC's much smaller volume versus the Big Three. Though the ragtop American ran a full seven years (1961-67), the open Classic/Rebel lasted only four (1965-68), and the counterpart Ambassador just three (1965-67). AMC's most-productive soft-top year was 1965, when 3882 Americans, 4953 Classics, and 3499 Ambassadors were produced. All stand to grow in collector esteem and dollar value as the years roll by, as do interesting closed models like the '57 Rebel, the '64 Typhoon, and, of course, the "Scrambler."