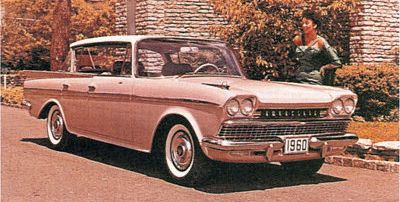 Dropping the respected names of Nash and Hudson led to the development of the 1960-1961 AMC/Rambler Ambassador. It probably wasn't the smartest thing George Romney ever did, but it wasn't that important, either. The crucial decision -- made after AMC president George Mason died in 1954 and Romney took the helm of the newly christened American Motors -- was to quit competing across-the-board with the Big Three.

Romney did this by concentrating heavily on the Rambler, which had carved out a niche for itself with economy-minded buyers. For 1956 he had restyled and expanded the Rambler line, and by 1958's unexpected recession he looked like the Wizard of Oz: Sales of big cars bottomed, and Romney was left gloating over his sudden success. It was a case of brilliant timing. All over the country people were getting into Ramblers.

American Motors, which had bumped along at the 100,000-car level for its first three years of life, suddenly found its sales doubled. A year later they doubled again. By 1960, Rambler was number three in the industry, displacing traditional third-place Plymouth. It was the first time an "independent" had scored that high since the 1929 Essex.

The decision to drop the Nash and Hudson brands was made not to kill off two fine old names, but to emphasize AMC's departure from previous practices. Indeed, up until almost the last moment, a large Rambler-based car called the "Ambassador" (the old Nash model name) had been in clay model form bearing Nash and Hudson badges.

When this model finally emerged in production as the 1958 "Rambler Ambassador," it was found to be only modestly downsized from the previous big Hudson and Nash. It lost four and one-half inches of wheelbase and a hundred-odd pounds, but it was still powered by the AMC 327 V-8 and had even more horsepower than the '57 big cars. That made it livelier, but without stretching your imagination too much, you could call it a kind of gas-guzzling dinosaur -- the type of car Mr. Romney said he wasn't building anymore.

"It was a hedge -- a kind of failsafe," remembered former AMC chairman Roy D. Chapin, Jr. "If the small car gambit went bad, we had the Ambassador shell and could expand on it. As it happened, the small cars didn't go bad, so the Ambassador kind of hung around as a sidelight." A valid summation indeed, as in model year 1958, the Ambassador's first year as a Rambler, they managed to sell exactly 1,340 examples.

Go to the next page to find out about the styling and sales success of the 1960-1961 AMC/Rambler Ambassador.