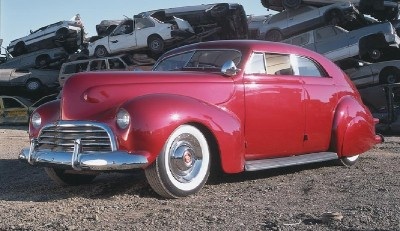 The Ohanesian 1940 Mercury had the two key ingredients of a winning custom car: good design sense and quality craftsmanship. In the early days of customizing, many cars had one but not the other.

Some cars looked great from a distance, but close examination revealed slipshod metalwork with an excess of lead filler. These cars prompted the then-derogatory term "leadsled." Other cars had quality bodywork, but ungainly proportions and bizarre styling details.

This breathtaking 1940 Mercury convertible sedan, originally built for Harold "Buddy" Ohanesian of Sacramento, gets it all right. The project was started in 1943, and progressed gradually as Ohanesian drove the car in between ­customizing sessions.

Harry Westergard performed some of the restyling, then Ohanesian's high school buddy Dick Bertolucci took over.

The hood and front fenders were reshaped to accept a 1946 Chevy grille. Initially, the stock Mercury headlight bezels were painted body color, but by the mid 1950s the car sported frenched headlights with an attractive "cove" on their lower edges.

The windshield was chopped four inches, with the vent windows and trim cut down to match. All of the stock chrome trim was removed, along with the door handles. The door latches were modified to operate by pushbutton electric solenoids mounted in the running boards.

A 1940 Packard ­provided the teardrop rear fender skirts. The rear fenders were molded to the body, along with the taillights and rear splash pan from a 1942 Ford.

Both bumpers were sourced from a 1942 Chevy, and the rear one was ­modified with molded-in exhaust outlets. The rear license plate was frenched into the decklid and mounted behind a piece of glass -- a modification that police occasionally frowned upon at the time.

All of the body modifications are impressive, but the highlight of the car is the beautifully contoured steel top. It was hand-formed by Bertolucci, who utilized the front half of a 1946 Chrysler top, the back half of a 1941 Buick roof, and his considerable hammer-welding and metal-fabrication skills.

The Ohanesian 1940 Mercury had a removable top, but one would be hard-pressed to tell. Dick Bertolucci's hand-contoured seams were so graceful they became nearly invisible.

The top is removable, but the seams are so tight and the shapes so fluid that it appears to be a solid part of the car. The stock trunk opening was cut down and the rear of the body significantly revamped to accommodate the new top.

The car was severely lowered in back with a C'd frame and de-arched rear spring with reversed eyes and long shackles. A steel plate was mounted under the gas tank to protect it from highway bumps. A dropped axle and straight spring brought the front ride height down.

The interior of the Ohanesian 1940 Mercury was finished with custom upholstery and a 1947 Cadillac dashboard.

Inside, a 1947 Cadillac dashboard was installed, along with custom upholstery. Under the hood, a 1946 Mercury flathead was installed to supply the power.

Buddy relied on the Merc as his daily driver for several years, even using it as a tow vehicle for his 1933 Ford coupe Bonneville racer. The car was then stored until the early 1970s, when it was acquired and partially refurbished by Louie Martin and Dennis Nash of Sacramento.

Ed Hegarty bought the car in about 1975, and had a more thorough restoration performed in time for an exhibit of historic hot rods and customs at the Oakland Museum in 1996.

The Mercury also appeared at the 50th Anniversary of the Sacramento Auto­rama in 2000, where Bertolucci was an ­honored builder, and at the first showing of customs at the Pebble Beach Concours in 2005.