Can any car be converted into a grease car?

by Julia Layton
NEXT PAGE 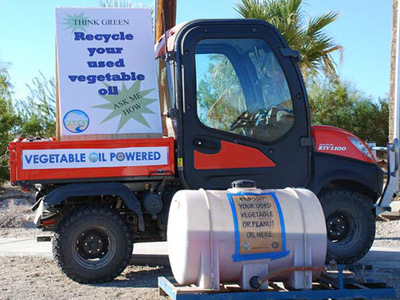 ­While most car owners are filling up on fossil fuels once a week, and hybrid-car owners are happily filling up a couple of times a month, people who have converted their cars to grease cars are laughing all the way to the bank.

The eco-bank, that is. Grease cars run almost entirely on waste vegetable oil -- that's the stuff McDonald's (and pretty much every other restaurant) dumps out of its fryers daily. Grease-car owners only have to fill up on diesel about every couple of months.

And while a grease car gets about the same mileage as a regular diesel car and requires an up-front investment that can take a while to recoup, the car's emissions levels are a marked improvement over other types of vehicles, making it a phenomenal tool for reducing pollution. For one thing, there's no sulfur in vegetable oil like there is in diesel fuel; and sulfur emissions, which cause acid rain, have been associated with increased cancer risk, too. Grease cars also release up to one-third fewer heart-and-lung-damaging particulates into the atmosphere.

­Other grease-car advantages target global warming. Greenhouse gas emissions can drop anywhere from 78 to 87 percent overall when you convert a diesel car to a grease car [source: Lloyd]. While they still emit nitrogen oxides and carbon monoxide, grease cars are carbon neutral: The vegetables grown to produce vegetable oil absorb more carbon dioxide than is emitted when a car burns that oil for energy.

So grease cars are a great choice for reducing your carbon footprint, but is it worth the effort? How hard is it to convert a diesel car into a grease car, and how much will it cost you?

In this article, we'll check out the grease-car process and find out if it's something just anybody can do. As it turns out, the initial conversion isn't such a big deal, but it's not the first step. The first step is to find yourself a good source of nasty fryer oil. You can't just drive up to a gas station and request fryer grease.