How the Honda CR-Z Works 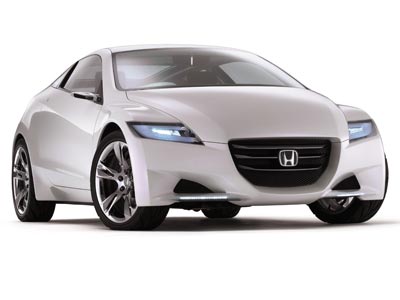 The Honda CR-Z is a new hybrid concept that aims to add a sportier element to the technology.
Honda

One of the biggest challenges automakers are having with the current push for more hybrid car technology has a lot to do with perception. Certainly one image most auto companies want to convey to their audience is how "green" a hybrid car is. Most people understand that the point of hybrids is to place an emphasis on better fuel efficiency. By switching between an electric motor and a gasoline engine, hybrid cars stretch out the mileage achieved by each tank of fuel -- the less fuel we consume over the lifetime of a car, the less of an impact we have on the environment around us.

But a more difficult issue automakers are dealing with is that of the image of hybrid cars as slow or lacking power. Gasoline engines generally provide a good deal of horsepower and a fair amount of torque, and therefore they accelerate quickly. But because the gasoline engines in most hybrid cars are typically smaller, they don't produce quite as much acceleration. Some drivers -- especially the ones more acquainted with sportier engines -- might not like this aspect and may tend to shy away from hybrid technology, sticking solely to their fossil fuel-powered cars.

But some car makers are thinking of ways to introduce much faster hybrids, and both the interior and exterior of the newer models might start looking and driving a whole lot better. One such model is the Honda CR-Z, which on the outside is quite a departure from previous Honda models like the Civic Hybrid. Honda's focus with the new car looks to be less about the fact that it's a hybrid and more about its sporty nature. CR-Z stands for "Compact Renaissance Zero," hinting not just at the car's small size but also at a brand new start in fundamentals and design.

The Honda CR-Z began as a concept and wasn't slated for production until as late as 2011 or even 2012. However, Honda has moved that date up -- most likely due to changing fuel standards and more demand for fuel-efficient technology -- so now the hybrid remains set for a late 2010 release. 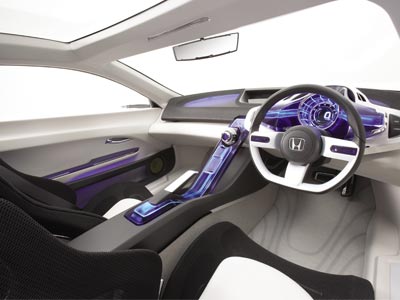 The Honda CR-Z stands apart from other models like the Civic.
Honda

Compared to other cars in Honda's current lineup, the CR-Z looks like a completely different type of car, and it's evident that the automaker is going for a much more futuristic look. Put the CR-Z next to the popular Civic -- or its hybrid counterpart, for that matter, since the two Civic models look nearly identical despite different technologies under the hood -- and it's clear that Honda is attempting a new approach to hybrid car design with the CR-Z.

The front of the CR-Z slopes down dramatically and comes together in a large, low grille. Altogether it resembles something aquatic. The doors and windows follow the same sloping design, then rise upward toward the back and form a slick hatchback at the rear.

The CR-Z is a small two-seater, yet despite the compact size of the car, the interior was designed to be spacious and comfortable, according to Honda's press release. The seat covers are mesh and simple and early concept photos have illustrated a futuristic dashboard with a shiny, glass-covered instrument panel.

And despite the car's streamlined, futuristic look, its design actually pays homage to a Honda model from the 1980s and early 90s. Fans of Honda will recognize that the name CR-Z is a reference to the Honda CRX, a compact car with a short hatchback design that was in production from 1983 to 1991. Now, you may be wondering why they skipped from X to Z in the alphabet, but stick a Y onto the end of the name and you'll realize how difficult it might be to sell a car with the name CR-Y.

Of course, the big difference between the CRX from the '80s and the upcoming CR-Z is what's under the hood -- while the CRX was equipped with a gasoline engine, the CR-Z is a full-on hybrid. Read on to learn about Honda's hybrid technology for the CR-Z. 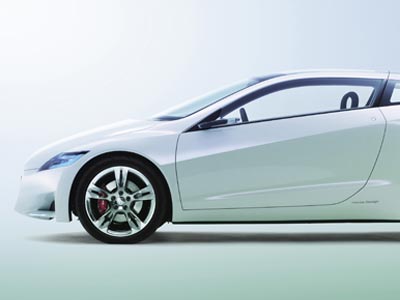 The Honda CR-Z combines engine elements from the Civic and the Insight to make a unique and efficient hybrid.
Honda

The CR-Z may look nothing like the Honda Civic, but its insides are a bit more comparable. The new hybrid will have a 140-horsepower, 1.8-liter, single overhead cam (SOHC) i-VTEC engine which comes from the Civic and would be much bigger and more powerful than most current hybrid gasoline engines. The gasoline engine alone, according to Honda's Web site, gets 25 miles per gallon (10.6 kilometers per liter) in the city and 36 miles per gallon (15.3 kilometers per liter) on the highway for a combined average of 29 miles per gallon (12.3 kilometers per liter). That, coupled with an electric motor that would presumably power the car at lower speeds and assist during uphill climbs, will most likely further increase the fuel efficiency of the CR-Z. Executives also plan to offer both automatic and manual transmissions, and the throttle system for the SOHC i-VTEC engine uses drive-by-wire technology.

The system that includes the electric motor and battery will come from the Honda Insight and is called the Integrated Motor Assist system, or IMA. The IMA's design is thin, allowing it to fit between the engine and transmission to allow for more space, a boon for compact hatchback cars like the CR-Z. Another option taken from the Insight is a continuously variable transmission, or CVT, which would be coupled with the drive-by-wire technology.

By taking these various elements from other vehicles and combining them into one package, Honda is attempting to reduce costs. Honda has also cut down on weight: the CR-Z weighs just 2,800 pounds (1,270 kilograms) -- fairly light for a hybrid car. This is mainly due to a lighter body and a smaller battery. Many older hybrids are weighed down by extremely heavy battery packs, which, ironically, results in poor fuel economy.

For lots more information about hybrid technology or other related topics, follow the links on the next page.

What is a hydrogen fuel reformer?
Are grease cars legal?
Spend Green to Drive Green