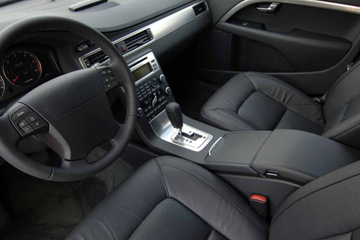 Most people seem to enjoy the smell of a new automobile. But is it possible that the fresh-off-the-dealer's-lot odor could also make you sick?
Dr. Heinz Linke/E+/Getty Images

We all know what "new car smell" is, right? It's the smell of the interior of, well, a new car. Most people like it and some people like it so much that they buy new-car-smell sprays and air fresheners that make the interiors of their cars smell new until they're old enough to be towed off to the junkyard. But is it possible that new car smell could also make you sick?

A lot of people think so. There have been studies suggesting that at least a few of the chemicals that give a car that fresh-off-the-dealer's-lot odor may be toxic and not all of them go away as the car gets older. But before we can answer the question of whether new car smell is or isn't toxic, we have a more important question to answer: What exactly is new car smell made of, anyway?

That last group is closest to the mark. There really are a whole lot of chemicals making up the interior of a car and some of them release volatile organic compounds (VOCs) into the car's interior, a process that has the somewhat unpleasant-sounding name "outgassing." It's these VOCs that produce new car smell, though some of them produce no odor at all. Some of these volatile chemicals, like ethyl benzene and formaldehyde, are also found in paints and glues, and they can cause problems like dizziness, headache, allergies or even cancer when inhaled in large enough quantities or for long enough periods of time. Some people have compared inhaling new car smell to glue sniffing or even sick-building syndrome.

But are there enough of these compounds in new car smell to make a fresh car interior truly unhealthy or would they require more exposure than the average driver is likely to get to them? The best way to find out is -- you guessed it -- to do a scientific study. Let's talk about a couple of the studies that have been done and what they've found out.

Questions about the toxicity of new car smell aren't new. Neither are studies aimed at determining whether it's a problem you should be seriously worried about. Probably the most recent of these studies was conducted in February of 2012 by a non-profit group called the Ecology Center. Their "Model Year 2011/2012 Guide to New Vehicles" (which you can download in PDF format here) is unequivocal on the issue: "[T]hese chemicals [in new car smell] can be harmful when inhaled or ingested and may lead to severe health impacts such as birth defects, learning disabilities and cancer. Since the average American spends more than 1.5 hours in a car every day, toxic chemical exposure inside vehicles is becoming a major source of potential indoor air pollution." Whoa! That's enough to make you want to wear a gas mask until your car's old enough for the warranty to expire! But before you decide to buy only used cars for the rest of your driving life, they add that "some cars are better than others. Toxic chemicals are not required to make indoor auto parts, and some manufacturers have begun to phase them out."

Okay, guys, let's name some names. Which cars does the Ecology Center believe have the healthiest interiors? Their top five picks, starting with the healthiest, are the 2012 Honda Civic, 2011 Toyota Prius, the 2011 Honda CR-Z, the 2011 Nissan Cube and the 2012 Acura RDX. Check their PDF to see the rest of the top ten. The two cars with the least healthy interiors, according to the Ecology Center, are the 2011 Chrysler 200 S and, in last place, the 2011 Mitsubishi Outlander Sport. Honda wins as having the line of cars with the healthiest interiors overall. The report concentrates on the presence of bromine (used in flame retardants), chlorine, and lead, grouping other volatile organic chemicals in a single category in their rankings. The report includes a list of hundreds of popular cars manufactured from 2006 to the present and lists the amount of each of these substances present in each car's interior.

Fortunately, a lot of the volatile chemicals in a car's interior go away over time -- that's why they call it "new car smell" -- but they don't go away completely and they can come back on hot days when the higher temperatures increase the rate of outgassing. One thing you can do to combat this process on hot days is to roll down the windows rather than using the air conditioner, letting fresh air circulate into the car and releasing the volatile compounds into the air outside (which isn't necessarily good for the air outside, but it's certainly better than being closed up in a car full of toxic fumes). You can also park your car in the shade, so it will stay reasonably cool.

Not all studies done over the years have agreed that new car smell is a danger to automobile occupants. A 2007 study conducted at the Technical University of Munich in Germany concluded that the chemical compounds released inside a car might at worst exacerbate allergies, but don't pose any other significant threats to human health. The study was conducted by collecting air samples from the interiors of new cars and three-year-old cars placed under 14,000 watts of lights, which generated interior temperatures up to 150-degree Fahrenheit (65.6-degree Celsius), a lot hotter than the average car is likely to become under ordinary conditions. They then exposed human, mouse and hamster cells to these samples to look for toxic effects. None were found. The researchers concluded that new car smell isn't toxic. However, the researchers also admitted that if the air inside an office building were found to have the same chemical content as the air samples found in the cars, the building would be declared to have sick-building syndrome and the workers would be sent home until it had been cured.

So in a sense both studies agree: Automobile interiors contain poisonous chemicals. But the Ecology Center feels that these chemicals represent a health threat to occupants and the German researchers do not. In the end, you'll just have to choose which study you want to take seriously. And maybe roll down your windows a bit more than you usually do to let the bad air out.

If I ever put together a list of my five favorite odors nobody would ever name a perfume after, I think new car smell would easily make the top five, right after freshly ground coffee beans and way ahead of wet paint. So it's rather distressing to discover that it might be hazardous to my health. Given that researchers disagree on just how much of a danger the volatile chemicals in an automobile interior represent, you might not want to start wearing that gas mask quite yet. But I'll confess that it made me feel a lot better to see that my own car, a 2011 Toyota Prius, was determined to have the second healthiest interior by the Ecology Center. Car buyers shopping for a healthy car would do well to look at the health rankings in their report.