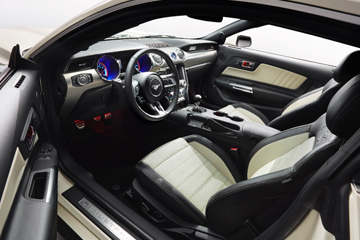 The 2015 Ford Mustang 50-Year Limited Edition interior in Wimbledon White and black leather with contrasting cashmere accents and stitching — and probably a bunch of VOCs, too.
(Courtesy of the Ford Motor Company)

There is nothing like new car smell. You probably wouldn't call it a fresh smell, but it's definitely an unused smell. No one else's funk has permeated the car; it's a blank slate for you and your very own funk. It smells like money — maybe like your first real job, or a graduation present, or a reward for your retirement. It might smell a bit like leather if you're fancy, or it might smell more like vinyl (before the kids have spilled who-knows-what on its easy-to-clean surface). Either way, it smells like you made a decision and committed the cash to paying for it over the next few years.

All of this is lovely, but what actually is new car smell? The truth is it's a far less romantic, yet still heady, mix of 50 to 60 volatile organic compounds, or VOCs, off-gassing in your car. (These are the same compounds that cause a greasy film to form on your car's windshield.) At new-car concentrations, these chemicals are not terribly dangerous, but they're not exactly aromatherapy, either. They do break down quickly, to the tune of about 20 percent decay every week, so the smell doesn't linger all that long. That's why we call it new-car smell, not car-I've-had-for-five-years smell.

As much as we love new-car smell, auto manufacturers are working to eliminate it. Not that they don't like the smell, but they'd rather not use the chemicals involved in the smell if they can help it. Automotive materials that include fewer VOCs, like soy-based foam seats cushions, don't off-gas quite so much, and they don't really have a smell. In fact, there may come a time when new-car smell is only available in a bottle. And if you're into that kind of thing, rest easy knowing that fragrance manufacturers aren't bottling up semi-dangerous VOCs. They're faking it, which is probably a good thing.

That's the easy answer to the question. Super nerds may proceed to the next page, where we'll look at each of the VOCs that cause new car small in more detail. 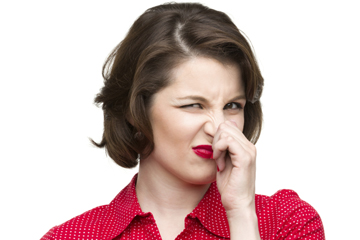 How Whiplash-injury-lessening Seats Work
How Automotive Warning Lights Work
Could Your Gas Cap Be Costing You Money?