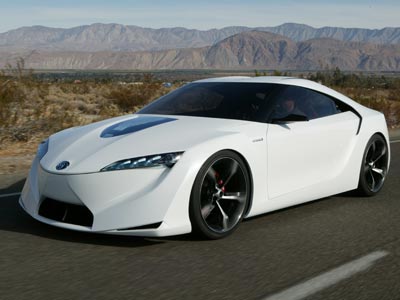 One common complaint charged against hybrid cars is that they're a little too bland. Despite some slick, futuristic-seeming features on the instrument panel that inform drivers of efficiency statistics like average miles per gallon and battery charge levels, some hybrid cars might not catch the eye of potential new car buyers.

This is typically because most hybrid cars are small and compact, and companies struggling to catch up with current eco-friendly trends have simply retrofitted older, established designs. Hybrid powertrains are also considered slightly slower or less powerful than the conventional gasoline-powered cars on the road. The reason for this is twofold: First, the gas engines found in gas-electric hybrid cars are generally smaller than those engines found in typical passenger cars. A smaller engine equals less power, which, of course, makes it more difficult for hybrids to accelerate at a fast rate. For instance, while most conventional cars can accelerate from zero to 60 miles per hour (97 kilometers per hour) in about six seconds, most hybrid cars take around 10 seconds to achieve the same speed. This smaller gas engine is coupled with an even smaller electric motor, which provides extra power to drive the wheels -- but still results in much less power.

Although it's generally accepted that hybrid cars are an important innovation that create fewer carbon emissions and reduce the human impact on global warming, the technology hasn't impressed everyone. Some are simply wondering: When will hybrids start having a little more kick?

Toyota, makers of the popular Prius hybrid, has considered the demand for a more sporty design in the hybrid car market. After spending some time at the drawing board, the company has introduced a vehicle called the Toyota FT-HS Hybrid Sports Concept. And the result is something that looks more like a race car than a hybrid car, and some have even described it as a "Prius on steroids." Even though the FT-HS is currently a concept car -- meaning there's a good chance the car might never go into full production -- the design offers a unique view of a flashier kind of hybrid. 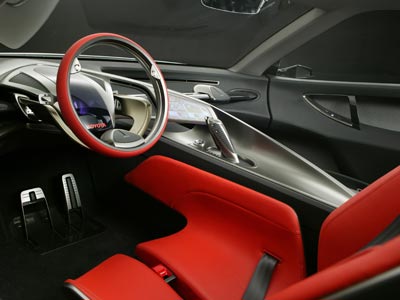 The sporty look of the Toyota FT-HS steps away from the standard hybrid car design.
Toyota

The first thing that stands out about the Toyota FT-HS Hybrid Sports Concept is the car's design. It doesn't look like any other hybrid car currently on the road. The FT-HS was designed by Calty Design Research, which is Toyota's design studio located in Newport Beach, Calif. The company originally introduced the car at the 2007 North American International Auto Show in Detroit, Mich., as nothing more than a few sketches and some 3-D images, but working models have since emerged and some reports suggest the concept could go into production soon.

The FT-HS (which stands for Future Toyota Hybrid Sport) has a sporty, triangular profile, one that's similar in spirit to the Toyota Supra, the company's earlier sports car that's no longer in production. Calty apparently modeled the streamlined design with the look of a downhill skier in mind, where several individual aerodynamic parts are emphasized over an overall sleek design. The area under the headlights, for instance, swoops inward more dramatically than is typical, and a ridge that rises along the hybrid's lower door edge extends upward near the rear wheels.

The hybrid is a 2+2, meaning that it's meant for a driver and a passenger but two more can squeeze in the back if necessary. The FT-HS is quite large, actually -- nearly as big as a Corvette, measuring 170.3 inches (432.6 centimeters) from front to back, 73.2 inches (186 centimeters) wide and 50.8 inches (129 centimeters) tall. With the intent of placing focus on the hybrid technology, Calty made part of the engine visible through a hole in the hood.

Calty calls the interior of the FT-HS the "Solo Space," emphasizing the driver's importance and highlighting the driver's seat as a sort of cockpit. Much of the design suggests lightweight material; the seats consist simply of thin pads and the wheels (made of carbon fiber) are also lightweight to encourage a sporty, Formula 1 feel. The roof might also end up being retractable, sliding back to cover the backseat area, making it just a two-seat car. 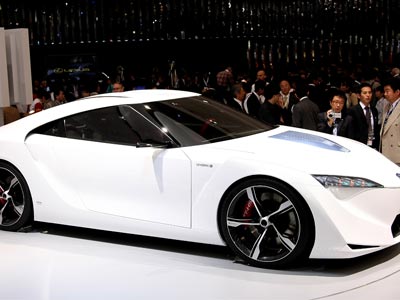