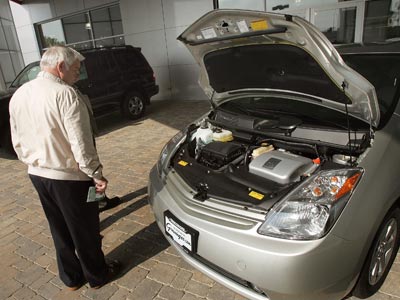 Although makers of available conversion kits claim to make cars like the Prius pictured above more efficient, there may be additional risks and challenges that come with them.
Tim Boyle/Getty Images

There are several different types of electric conversion kits available. Some are meant for specific makes of cars. A company called A123 Systems, for example, began offering the first mass-produced aftermarket electric conversion kit in 2008, the Hymotion L5, a device they call a range extender module. The Hymotion L5 kit is meant specifically for the Toyota Prius, and it turns the popular hybrid car into a plug-in hybrid, the type of vehicle that (to date) rarely makes it past the concept stage. Instead of generating electric power with the help of the Prius's engine, the module can plug in to any 120-volt house current and fully charge within just four hours.

The device essentially adds a much bigger battery to the Prius -- it carries 5,000 watt-hours of electric power, compared to the 1,300 watt-hours the original Prius battery offers. The conversion kit adds to the car's electric range and allegedly bumps the average fuel efficiency from 40 miles per gallon (17 kilometers per liter) to more than 100 miles per gallon (42.5 kilometers per liter).

Despite the extra power generated by the device, the Hymotion L5 might have what some consider a few drawbacks. The first is the price: $10,395 plus applicable taxes. And anyone who wishes to purchase a kit must first pay a $1,000 down payment on A123's Web site. The module also isn't something that the company will simply mail to you with a set of instructions -- you have to visit the nearest authorized dealer for a proper installation -- there are 11 authorized dealers spread out across the United States.

Other conversion kits, like one offered by Poulsen Hybrid (about $3,500) or the Electrocharger by VS Composites (about $4,000), allegedly work with any conventional car, but they typically need to be installed by a mechanic or an authorized dealers, which, of course, costs more money.

Car manufacturers are skeptical about these conversion kits, primarily because despite claims that many of the devices can work with a conventional car, it's uncertain how truly universal these kits are. Parts from a conversion kit could interfere with parts on the original vehicle and cause related systems to fail. On top of this, a new car warranty could become void by adding unauthorized aftermarket parts.

So, before you even think about trying out an electric car conversion kit, it would be best to talk to someone -- particularly an experienced mechanic -- who really knows what he or she is talking about. Unfortunately, many of the conversion kit guides you'll find on the Internet are, for lack of a better term, snake oil.

For more information about electric cars, hybrid cars and other related topics, follow the links the next page.