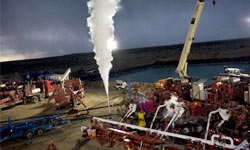 With oil and fossil fuel resources dwindling around the world, the race to find the next big energy solution is definitely on. There may not be a magic bullet to solve that energy crisis, or a perfect fuel that is infinitely available and doesn't pollute the environment. But one option, synthetic fuels -- or synfuels -- offers some advantages and some drawbacks when compared to conventional oil-based fossil fuels. Synthetic fuel is a category of fuels that includes any fuel "produced from coal, natural gas or biomass feedstocks through chemical conversion" [source: U.S. Energy Information Administration]. These types of fuels are often called Fischer-Tropsch liquids, after the process used to create them. The synfuels category also includes fuels derived from synthetic crude, a substance similar to crude oil that is synthesized from natural resources like bitumen or oil shale [source: U.S. Energy Information Administration]. Chemically, synfuels are similar to the gasoline and diesel fuels we use today and can be used in existing engines. But producing them requires complex chemical conversions.

National governments and energy companies have been paying more attention to synthetic fuels in recent years, as rising oil prices and political instability in oil-producing countries have created incentives to seek out alternatives. The main benefit of synfuels is that they can be produced using substances like coal, natural gas and even plant waste, which are widely available. Many synfuels also burn cleaner than conventional fuel. But there are also disadvantages. While they can burn cleaner, producing synthetic fuels often causes just as much, if not more, pollution than traditional gasoline. Synfuels still remain more expensive to produce than conventional fuels, mostly because more research, development and investment are necessary to make production economically viable.

To find out about the different types of synthetic fuels currently being manufactured, keep reading.