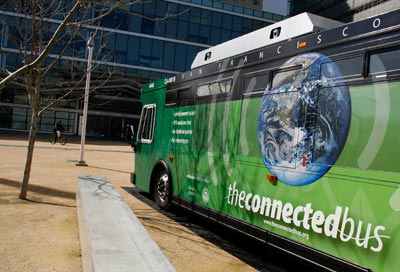 The Connected Bus, a new bus with several high-tech features, including a diesel hybrid system, is currently in service in San Francisco, Calif.
Justin Sullivan/Getty Images

If you live in a city like New York, Chicago, or San Francisco Calif., and you use public transportation, chances are good that you've already been a passenger on a diesel hybrid bus. Nearly all buses and heavy-duty large trucks use diesel engines because of the massive torque available -- torque helps the vehicle pull huge amounts of weight. Just like cars, they use either parallel or series hybrid systems to assist the diesel engines in these buses.

San Francisco's hybrid bus system, first unveiled in April 2007, uses a series hybrid system where the engine turns a generator that produces electricity to power electric drive motors that propel the bus. The wheels aren't turned by diesel power directly, but rather electricity.

Seattle Wash. King County Metro Transit buses run on a parallel hybrid system - this means that at low speed the bus is mostly electrically driven, while at medium speeds it operates on a blend of diesel and electric power and at high speeds it runs on mostly diesel power.

The benefit offered by buses powered with diesel hybrid technology is that they produce significantly lower emissions and increased fuel efficiency. One of the downsides is the cost -- they can be several hundred thousand dollars more expensive than conventional buses. In Seattle, according to King County's Web site, fuel economy in the hybrid-powered buses is more than 4 mpg (1.7 km/l). That's pretty good when compared to the 2.6 mpg (1.1 km/l) the conventional diesel-powered buses are currently getting.

Some dispute whether hybrid buses are truly worth the extra cost. In Seattle, it has been reported that the buses have never achieved the fuel economy they were supposed to -- and in some cases, they actually achieved lower fuel economy numbers than standard diesel buses. Like a diesel hybrid car, it's also difficult to argue whether the added initial cost of the buses is made up for in fuel savings.

In the next section, we'll take a look at some of the diesel hybrid concept cars that have made their way into the auto show circuit. Will one end up in your garage?