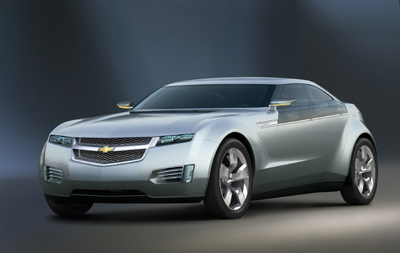 The 2007 Chevrolet Volt concept is an example of a series hybrid -- but not a diesel-powered hybrid.
© GM Corp.

A diesel engine and a gasoline engine are both are internal combustion engines. They both burn fuel to drive pistons, and they both have the same end result -- they provide the power that eventually turns the vehicle's wheels.

However, diesel engines are typically more efficient than gasoline engines, and there are a few mechanical differences between the two. First, diesel engines have no spark plugs -- air is compressed within the combustion chamber at such a high pressure that when diesel fuel is introduced, it ignites. Also, while gas engines use carburetors or port injection to deliver the fuel to the combustion chamber, today's diesel engines use what's called direct injection -- meaning the fuel is injected directly into the cylinder.

Compared to gasoline-powered vehicles, diesels are more fuel efficient, produce more torque and they tend to be more durable. On the other hand, they are often noisier, harder to start in cold weather and are more expensive than gasoline engines. For a much more complete understanding of diesel engines, you may want to read How Diesel Engines Work.

Hybrid vehicles, at least the ones that we're familiar with today, combine the attributes of a gasoline-powered vehicle with an electric-powered vehicle to achieve higher levels of fuel economy than a standalone internal combustion engine can. Typically, these cars feature gas-powered engines coupled with an electric motor that's powered by a large battery.

The two power sources found in a hybrid car come together in different ways. On a series hybrid, the gasoline engine is responsible only for charging the batteries; it is not directly responsible for turning the wheels of the vehicle. The engine turns a generator, the generator charges the batteries and the batteries power the vehicle's electric motor (or motors) to make the wheels turn. An example of this is the upcoming Chevrolet Volt.

On a parallel hybrid, the vehicle can be powered by either one of the two power sources. The power source the vehicle uses -- either the gas-powered engine or the electric-powered motor -- is dependent upon the current conditions, or rather what the driver is asking the vehicle to do. The Toyota Prius is an example of this kind of hybrid - it runs on electric power at lower speeds and turns on the gasoline engine for passing and higher speeds. Most hybrid cars on the road are parallel hybrids, and the cars discussed in this article follow this format as well.

If you're looking for a more detailed description of gasoline-powered hybrid technology, you may want to read How Hybrid Cars Work.

In the next section, we'll look at what it takes to build a diesel-powered hybrid, and examine why they're not on the roads yet.