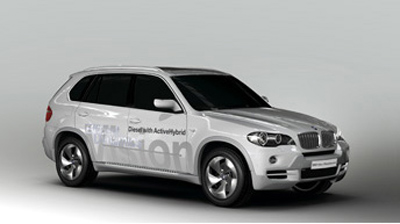 A diesel already achieves fuel economy superior to a gasoline engine. So what kind of mileage could an electric-assisted diesel achieve?

The Golf TDI Hybrid concept car, unveiled at the Geneva Motor Show this year, gets 69 mpg (29.3 km/l) in the European fuel economy test cycle, according to Volkswagen. Compare that to the Prius' 54 mpg (23 km/l) in the same test, and it's easy to see that adding a hybrid component can significantly boost mileage.

While they do tend to provide good fuel economy, until recently, diesels weren't known to be the cleanest method of getting around.

Both diesel engines and electric motors have reputations for generating enormous amounts of torque. Together, they can easily move a big SUV like the BMW X5. The German company unveiled a twin-turbocharged diesel hybrid concept version of the X5 at the Geneva Motor Show. The 2.0-liter four-cylinder diesel engine has 220 horsepower and 295 lb-ft of torque overall. That's more torque than the 3.0-liter six-cylinder gasoline engine that powers the base X5.

"It's not huge, but it's enough to motivate the X5 fairly well," said BMW's Buchko. "With this concept, we're showing what's possible."

In the next section, we'll take a look at the pros and cons of diesel hybrid buses -- in fact, depending on where you live, you may have already taken a ride in one.

Debuting at the 2008 Geneva Motor Show, the X5 Vision Diesel Hybrid concept showcases where BMW is going with its diesel hybrid technology. BMW spokesman Dave Buchko said the automaker plans to have a hybrid for sale next year.

The vehicle uses a mild hybrid setup, which, unlike a Prius, never runs solely on electric power. The electric system comes on to assist with acceleration. Braking also recharges the electric generator. If that's not green enough for you, the car also employs solar panels on its roof designed to warm up the car faster, operate audio equipment, run a mobile phone charger or even charge the vehicle's battery.