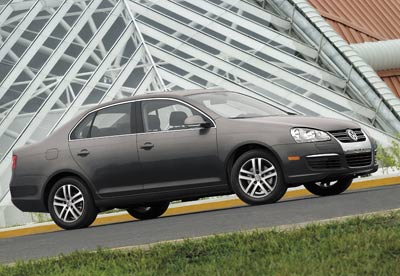 The Volkswagen Jetta TDI is significantly more expensiv­e than the gasoline-powered Jetta.
Volkswagen of America

Dave Buchko, a spokesman for BMW says "Hybrid technology can be applied to any sort of powertrain. From the perspective of a hybrid, it makes no difference."

In other words, technologically, a hybrid with a diesel engine wouldn't be all that different from one with a gasoline engine. Although diesel engines have higher compression ratios and generate more torque than gasoline engines, Buchko, whose company is developing a diesel hybrid, the BMW X5 SUV concept, said there aren't any challenges with building such a car.

However, cost may be a discouraging factor. Both hybrid cars and diesel cars are more expensive than the same vehicles with gas engines. A 2008 Honda Civic Hybrid costs about $7,000 over the base sedan, and a VW Jetta TDI costs about $5,000 more than the gasoline version.

"Putting the two systems together could make for a high-price vehicle," said Bruce Belzowski, an automotive industry expert at the University of Michigan.

"To get back the money you'd save on fuel economy, you'd have to keep it a very long time," stated Belzowski. He also claims that since many diesel engines get similar fuel economy to some hybrids -- even better in some cases -- that a clean diesel makes a hybrid unnecessary. Belzowski added, "If you got a diesel with a particulate filter, why would you need a hybrid?"

Automakers haven't looked heavily into diesel hybrids for a number of reasons. For one, according to BMW's Buchko, the CARB standards made it tough to sell diesel in cars in big markets like California and New York. Also, diesel fuel has always been cheap in Europe, making a hybrid diesel not as necessary. Cost is also a factor.

"Until very recently, [America's] gasoline prices were fairly low," Buchko said. "In Europe, they were historically much higher. People migrate to the cheapest fuel, and in Europe that's diesel."

He added that two-thirds of all BMW sales in Europe are diesels. But as fuel prices skyrocket everywhere, a hybrid diesel may be an attractive option for buyers soon, no matter where they live.

In the next section, we'll show you how the high torque of electric engines and diesel engines could combine to make for an amazing driving experience.

AdBlue and the Clean Diesel

Smaller diesel engines like the one used in the Jetta Clean Diesel can meet CARB standards by using systems like a nitrous oxide storage catalyst to reduce nitrous oxide emissions by up to 90 percent, and a particulate filter to further reduce emissions. While this does the trick with the Jetta's four-cylinder engine, larger engines need a little extra help.

That's where AdBlue comes in. This system injects urea during the exhaust process to dramatically reduce nitrous oxide (NOx) emissions. When mixed with the heat of the exhaust, the NOx and urea reform and what comes out is mostly harmless nitrogen. European car companies have started installing the ADBlue system on their larger cars with bigger engines, like the Mercedes-Benz ML320 BlueTEC and the BMW X5 xDrive35d -- both are SUVs. NOx-reducing systems like these will allow larger diesels to be sold in all 50 states.