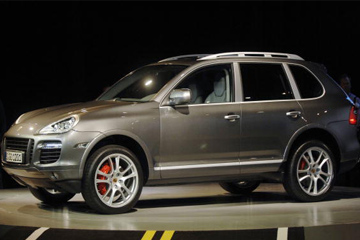 Porsche stepped into the crossover scene with the Cayenne in 2003 and in 2011 their redesigned version won Motor Trend's SUV of the Year award. This was a big achievement for Porsche since many were skeptical that an SUV made by Porsche was a good idea. As far as AWD crossovers go, the Cayenne is not surprisingly one of the most luxurious you can find. The base MSPR starts at $48,000 and then jumps leaps and bounds from there. Order one of these with the best engine with all the available options and you're looking at a whopping $170,000 [source: Markus].

The Cayenne comes in four different, including a 3.6-liter V-6 that produces 300-horsepower and a gas/electric 3.0-liter supercharged V-6 that puts out 380-horsepower with 20 miles per gallon (8.5 kilometers per liter) city and 24 miles per gallon (10.2 kilometers per liter) on the highway [source: Porsche]. The crown jewel of the Cayenne's engine offerings is the 4.8-liter twin-turbocharged V-8 that spews 500-horsepower straight out of its mouth. That's an additional 100-horsepower from the standard 4.8-liter V-8 that's also available. The turbo version will kick this AWD crossover from 0 to 60 miles per hour (96.6 kilometers per hour) in just 4.4 seconds [source: Porsche].

In the all-wheel-drive department the Cayenne comes with a torque vectoring system to deliver power to the wheels most in need. By default 60 percent of the engine's power goes to the rear wheels and 40 percent to the front. The off-road mode on the Cayenne changes the vehicles handling of the transmission, traction and chassis and optional air springs can bring the ground clearance up to 8.5 inches [source: Markus]. The previous generation Cayenne had a dual-range transfer case that allowed for more rugged off-roading, but was dropped in the 2011 redesign, saving about 400 pounds (181.4 kilograms) of weight [source: Edmunds].

Although the Cayenne is capable of going off-road, this crossover may be best left on level surfaces. It's kind of like using a priceless vase to prop open a door. Yes, it can serve that function, but it's probably not the best idea. If you're looking for luxury, speed and versatility, it's hard to find a better fusion of all three in an AWD crossover though.

Go on to the next page to see our last AWD crossover.