by Christopher Neiger
Prev NEXT
3 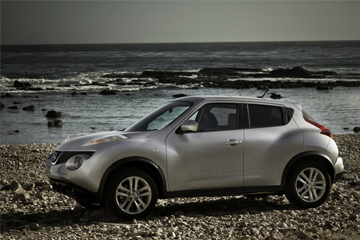 The Nissan Juke
Courtesy of Nissan

The Nissan Juke is a compact crossover that looks like it's in a class all by itself. Think of the Juke as the younger brother to the Rogue and Murano who wants to have more fun and go his own way. The offbeat styling may turn some potential crossover buyers away, but its sportiness and unique personality is a breath of fresh air in a crowded crossover market.

The Juke comes available with just one engine, a 1.6-liter turbocharged direct injection four-cylinder that produces 188 horsepower and 177 ft-lb. of torque to the all-wheel-drive's 3,200 pounds (1,451 kilograms) [source: Nissan]. The AWD model is only available with a continuously variable automatic transmission, so you'll have to sacrifice the six-speed manual for the all-wheel-drive capability.

The manual transmission doesn't stifle all of your performance options; Nissan offers three different performance modes: Normal, Sport and Eco. Each mode adjusts the throttle response, steering, and transmission shifting depending on your preference at the time.

Although the AWD system may not be built for climbing rocks, it does offer some impressive characteristics. Nissan equipped the Juke with a torque vectoring system that splits the torque between the front and rear wheels to provide the right amount of power to each wheel. For example, when starting the Juke uphill on a wet surface each wheel can receive 25 percent of the torque, but if you make a hard turn right after that then the torque can be distributed between the three wheels that need and leave one with no torque at all.

The torque vectoring distribution is decided by calculating the vehicle's speed, lateral G-force, wheel speed, gear position and yaw rate. Yaw is a term used to describe a vehicle's turning on its vertical axis, or simply when the vehicle is side skidding. The Juke vehicle to implement torque vectoring into a compact crossover and Nissan says that it's also the lightest vectoring system in the world.

The Juke starts at $19,500 and can be equipped with add-ons that will put you around $23,000. Nissan's little crossover not only offers a sophisticated AWD system but also comes with the Insurance Institute for Highway Safety's highest crash test rating in all four categories [source: Nissan].

Go on to the next page to find out about our next AWD crossover, the 2011 SUV of the Year.