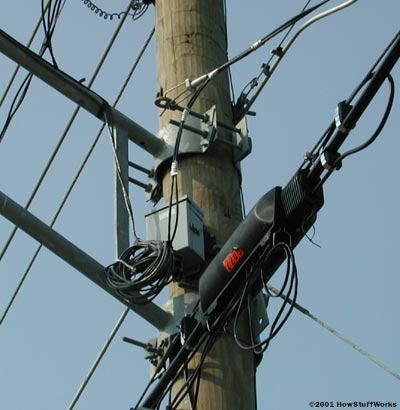 The central control box houses the computer, the brains of the system. The computer activates the cameras based on information it receives from the traffic lights and triggers.

As we saw in the previous section, a red-light-camera system is controlled by a computer. To see how these computers bring everything together, let's look at a typical intersection and a typical traffic violation.

For simplicity's sake, we'll only consider traffic moving in one direction through this intersection. When the light is green or yellow for incoming traffic, the computer ignores the triggers and does not activate the cameras. The system doesn't "turn on" until it receives a signal that the light is red. If you're already in the middle of the intersection when the light turns red, the system will not activate the cameras (this is not a traffic violation in most areas). Some systems wait a fraction of a second after the light turns red, to give drivers a "grace period."

Click on "Run the light" to see how the basic elements of a red-light-camera system work together.

To fully document the violation, the computer superimposes some extra information on these two photos. It includes:

With all of the information superimposed on the picture, along with photos of the infraction, the police have everything they need to charge the driver. In most areas, the police, or a private firm hired to maintain the system, simply look up the license plate and send the ticket in the mail. The driver (or car owner) can pay the fine through the mail and be done with it or he or she can try to contest the ticket in court. Of course, the police send the photos along with the ticket, so most drivers end up just paying the fine.

Red-light cameras have been around for more than 40 years, but they've only gained widespread popularity in the past decade. Police forces all over the world claim that these systems are a great addition to their communities. They serve as a deterrent against traffic violations, and they help police keep track of the worst offenders. Additionally, they are a good source of government revenue. It doesn't cost much to maintain the system once it's installed, and it works 24 hours a day, seven days a week, systematically catching violators and sending out revenue-generating traffic tickets that are really hard to contest.

To find out more about this technology, as well as some of the issues surrounding its use, check out the links below.