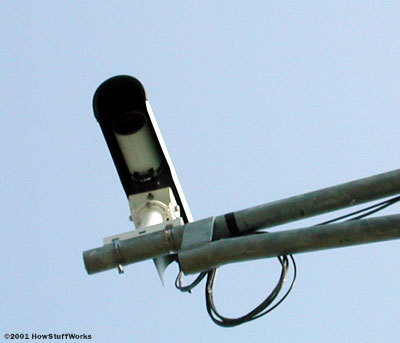 Most modern red-light-camera systems use digital cameras. Older ones use 35-mm cameras, in which case the film has to be collected for development periodically.

There are a number of trigger technologies, but they all serve the same purpose: They detect when a car has moved past a particular point in the road. Red-light systems typically have two induction-loop triggers positioned under the road near the stop line (more on this later).

The computer is the brains behind the operation. It is wired to the cameras, the triggers and the traffic-light circuit itself. The computer constantly monitors the traffic signal and the triggers. If a car sets off a trigger when the light is red, the computer takes two pictures to document the violation. The first picture shows the car just on the edge of the intersection and the second picture shows the car in the middle of the intersection.

In some states, a ticket is issued to the car's owner, no matter who's actually driving. In these states, the red-light camera only needs to photograph the car from behind, since the authorities only need a clear view of the rear license plate. In other states, the actual driver is responsible for paying the ticket. In this case, the system needs a second camera in front of the car, in order to get a shot of the driver's face. The ticket is still sent to the car's owner, but the authorities have the information available if there is any disagreement down the line.

The main trigger technology used in red-light systems is the induction loop. An induction-loop trigger is a length of electrical wire buried just under the asphalt. Usually, the wire is laid out in a couple of rectangular loops resting on top of each other (see diagram below).

This wire is hooked up to an electrical power source and a meter. If you've read How Electromagnets Work, you know that when you send electrical current through a wire, it generates a magnetic field. Positioning the wire in concentric loops, as in any electromagnet, amplifies this field.

When a car drives over an induction loop, it disturbs the loop's electromagnetic field. This changes the total inductance of the loop circuit.

This sort of field affects not only objects around the loop, but also the loop itself. The magnetic field induces an electrical voltage in the wire that is counter to the voltage of the circuit as a whole. This significantly alters the flow of current through the circuit.

The intensity of this induction depends on the structure and composition of the loop; changing the layout of the wires or using a different conductive material (metal) will change the loop's inductance. You can also change the inductance by introducing additional conductive materials into the loop's magnetic field. This is what happens when a car pulls up to the intersection. The huge mass of metal that makes up your car alters the magnetic field around the loop, changing its inductance.

Construction crews cut into the asphalt to install loop sensors. You can see where a loop was installed at this intersection.

The meter in the system constantly monitors the total inductance level of the circuit. When the inductance changes significantly, the computer recognizes this shift and knows that a car has passed over the loop.

This is the most common trigger mechanism, but it's not the only one in use. Some areas have had success with radar, laser or air-tube sensors.

One emerging trigger mechanism is the video loop. In this system, a computer analyzes a video feed from the intersection. As the computer receives each new video frame, it checks for substantial changes at specific points in the image. The computer is programmed to recognize the particular changes that indicate a car moving through the intersection. If the light is red and the computer recognizes this sort of change, it activates the still cameras. The main advantage of this system is you don't have to dig up the road to install it, and you can adjust the trigger areas at any time. Essentially, it is a virtual inductive-loop trigger.

The trigger mechanism isn't worth much if it isn't connected to a central brain. In the next section, we'll see how a red-light system's computer puts everything together to construct a case against any traffic violators.