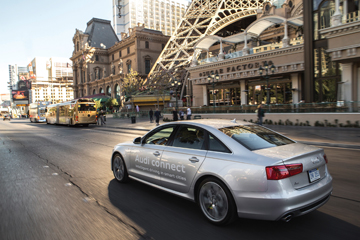 An Audi connect-equipped A6 cruises on the Las Vegas strip.
(Courtesy of Audi AG)

Traffic lights are so tedious, right? You have to know they're there, pay attention to what color they are and know what the colors mean, when all you really want to do is hack your car's entertainment system so you can watch Netflix while you drive. I mean, come on.

Well, sigh no more wannabe inattentive drivers! Audi is working on Project Traffic Light Online, which uses the Audi connect Online system to read the signals from a city's central traffic computer. If a green light is going to turn red, Audi's system will let you know with a message in the instrument cluster display that's located between those pesky dials that tell you, like, how fast you're going and how fast the engine is turning. Who even uses that information?

The system will also know when a red light is about to turn green, so it can fire up the engine a few seconds early to make start-stop tech even easier for drivers to use. And it will even calculate if you can make that stale green light; if not, it warns you to use the brakes. It won't actually break for you, but it will strongly suggest that you get on that.

Of course, all of that data isn't just floating in the air for anyone to use. Audi has a Project Traffic Light Online test car that's driving around Las Vegas right now, and they had to get permission from the Regional Transportation Commission of Southern Nevada to tap into the data. Luckily, Nevada is already on board with driverless cars being tested in the state, so this probably wasn't a big leap for the RTCSNV. But, as Audi electronics engineer Michael Zweck noted, "For a nationwide rollout, we will have to contact more than 500 independent agencies." Not to mention that as of right now, the format of the data hasn't been standardized. 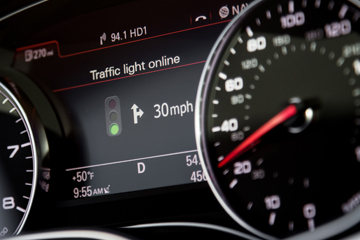