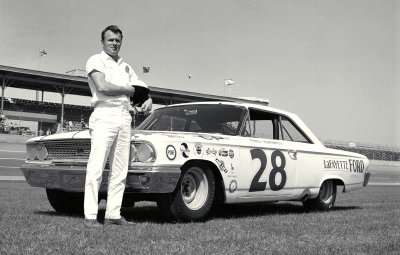 Fred Lorenzen, the first NASCAR driver to win over  in a year, was considered by many to be the  driver of his era. See more pictures of NASCAR.
©Wieck Media

Fred Lorenzen was 15 years old, he had his first experience in a beefed-up stock car. He and a bunch of his buddies from Elmhurst, Ill., took an old 1937 Plymouth out to an abandoned field and cranked it around in circles. The object of this teenage prank was to see who could flip the automobile first. Lorenzen claimed he was the first to achieve the dubious goal.

The speed game was already under Lorenzen's skin, and within a few years, he was gaining a reputation around short tracks in Illinois. He made a brief stab at NASCAR racing in 1956, but his operating funds ran out after competing in just seven races. Lorenzen went back home broken but undaunted. He graduated up stock car racing's ladder and began running some USAC stock car events in the Midwest.

Success came virtually overnight. Lorenzen won the USAC Stock Car championship crown in 1958 and '59. "In my best year, I won $14,000, a trophy, and a gold watch," said Lorenzen. "It was not taking me where I wanted to go."

In 1960, Lorenzen moved south and took up residence in a tiny trailer in a friend's backyard near Charlotte, N.C. He accepted a job with the famous Holman-Moody Ford team as a mechanic, but was restless in that role and quit. "I was bull-headed," said Lorenzen. "That was one of my problems. I thought I could make all the money myself by forming my own team."

Lorenzen made 10 NASCAR Grand National starts in 1960, winning $9,136. Near the close of the season, Lorenzen sold his car and headed back to Elmhurst. He was out of racing, hungry, disgusted, and ­discouraged.

On Christmas Eve 1960, Moody phoned Lorenzen and asked him if he was interested in becoming the lead driver on his team. "I was really surprised," said Lorenzen. "I couldn't imagine what I had done to impress them. I'm sure a lot of people thought they were crazy to hire me."

In his second start with the Holman-Moody team at Martinsville in 1961, Lorenzen claimed his first career ­victory. He followed that up with a highly charged triumph in Darlington's Rebel 300, beating old master Curtis Turner in a late-race duel. Lorenzen went on to win three of his 15 starts in '61, then won twice in 19 races in '62.

By 1963, Ford Motor Co. was back in racing, financing a fleet of cars on the NASCAR Grand National trail. Lorenzen hit stride, winning six races in 29 starts and finishing third in the final points standings, despite starting a shade more than half the races. He amassed winnings that totaled $122,588 and became the first driver to earn more than $100,000 in a single season.

Statistically, Lorenzen's most productive season was 1964 when he won half of his 16 NASCAR Grand National starts. Mechanical problems kept him out of the hunt in the first four races of his abbreviated season.

Following the Daytona 500, however, Lorenzen went on a tear, winning five straight starts. He drove his #28 Holman-Moody Ford to consecutive victories at Bristol, Atlanta, North Wilkesboro, Martinsville, and Darlington. Of the 1953 laps during that five-race stretch, Lorenzen led 1679 of them. It remains one of the most dominating performances over seven weeks in the history of NASCAR.

Lorenzen won the Daytona 500 in 1965. He made only five starts in 1967, but after compiling a career record of 26 victories in 129 starts, he suddenly retired from competition, citing ulcers and a loss of weight as reasons for the spur-of-the-moment decision.

He played the stock market and remained on the sidelines until May 1970, when the itch returned and he made a comeback attempt. Although he ran up front in a number of races, some of his competitive edge had been lost. By the fall of '72, Lorenzen bowed out for the final time and headed back to Illinois.

Herb Nab, who formed a close working relationship with Lorenzen when he was his crew chief, said Fearless Freddy was one of NASCAR's best drivers ever -- if not the very best. "That's the best driver there is," Nab said while pointing to Lorenzen during a lull in the garage area in 1964. "He can drive a race car better than any of the others, including Fireball Roberts. Don't let anyone tell you different."

What is a stock car?
How NASCAR Drafting Works
What were the stock car aero wars?