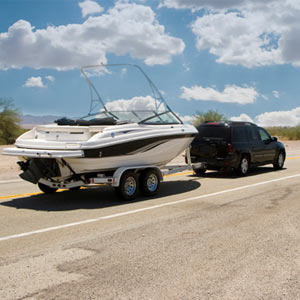 Before you head out on the open road, make sure your boat trailer adheres to all the state regulations.
iStockphoto/Tim McCaig

Boat towing laws can be a heated and controversial matter in certain states. In 2008, North Carolina's governor exerted his veto power -- for the first time in the state's history -- on a bill that would've loosened boat towing laws in the state. It would have extended both the width limit of boats and the times and days of the week boats could be towed. This upset recreational boaters and those wanting the state to hold competitive fishing tournaments [source: Woodward]. Nevertheless, the governor believed such loosened rules would make the roads unsafe.

Considering how serious and stringent these laws can get, it's wise to check out the laws for towing boats in the states you'll be driving through. Here's a list of some important differences of boat towing laws by state to give you an idea of what to look for.

Maximum towing speed: Increasing your speed always increases your risk of accident, but when you're towing, high speeds are exponentially more dangerous. This is why maximum towing speed may be lower than the stated speed limit. In Alaska, for instance, it's a mere 45 mph (72 kph). However, in Idaho, New Mexico, and South Dakota, it is 75 mph (120 kph). Other states fall somewhere in between. Take note that this usually applies only to major highways in the state. For more on this, read, "How to Tow at the Maximum Controllable Speed."

Maximum boat length: Although many states don't specify this, some states do. North Carolina is the strictest, capping it at 35 feet (10.7 meters). Most, however, allow 40 feet (12.2 meters) or more. Few states don't specify a maximum boat width. Although some stipulate 8 feet, the majority are a little more liberal at 8.5 feet (2.6 meters). Any wider, and authorities worry about the boats extending over the line on two-lane roads -- which would be especially dangerous if two boats were to pass each other.

Another thing to consider is brakes. Safe braking is especially important when towing -- sudden breaking feels vastly different with a huge load tacked on behind you. Many states require special trailer brakes if your boat weighs more than the specified threshold, which can be as low as 1,500 pounds (680 kilograms) [source: Bayliner.com]. Read "How to Brake While Towing" for more.

Other things that you shouldn't disregard as insignificant details are required by many states when you're towing a boat, including safety chains connecting the vehicle and boat in an X below the mount. They should be short enough to not hit the ground and long enough to not restrict turning [source: CA DMV].

If you do have a boat that exceeds specifications, you probably don't have to worry about avoiding certain states or breaking out the chainsaw -- you'll just need a special permit.