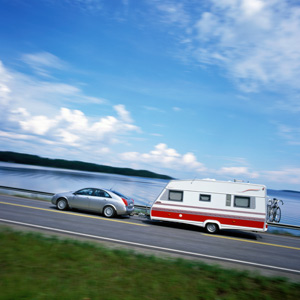 Most drivers hate to admit it, but eventually it happens to almost everyone. A quick glance away from the road as you adjust the radio controls, or maybe you're entering a new destination into an electronic navigation system. Perhaps you're fumbling to find a pen that just dropped out of your coat pocket and onto the car floor. Whatever the situation and regardless of your speed, you weren't paying attention to the road. Finally, you shift your focus back to the traffic around you, but much to your surprise, everything has changed.

The car in front of you, the one that was moving along at the same pace as you were just moments ago, is now stopped. If you're lucky, you have just enough time to react. You jab hard at the brake pedal with your right foot -- much harder than usual -- causing the nose of your car to dive toward the pavement. Your tires smoke and squeal as the brakes quickly bring your vehicle to a halt. You're thankful that you've avoided a collision, but you also realize that you're mere inches away from the bumper of the car in front of you. That was a close call.

But what if you were approaching the exact same stop with an extra three or four thousand pounds (1,360 to 2721 kilograms) of trailer weight behind you? Obviously, the results would have been much different, and it wouldn't have been a very pleasant experience for anyone involved. If you don't already know this from firsthand experience, then let us tell you -- braking in everyday traffic and braking while towing a trailer are two entirely different situations. It's all because of inertia, or the tendency for objects to resist changes in the way they are (or aren't) moving. The more mass an object has, the more it resists change -- all that added mass from a trailer makes it a lot harder to slow down.

It doesn't matter if you're driving a huge recreational vehicle pulling the family boat, a pickup truck towing a trailer full of firewood or a minivan pulling a pop-up camper. The same basic safety principles apply. Understanding basic towing and braking safety rules could mean the difference between getting to the boat launch safely and on time and spending the weekend filling out accident reports at the local police station.

So what's arguably the most important brake-related safety tip to keep in mind while towing a trailer? Read the next page to find out. 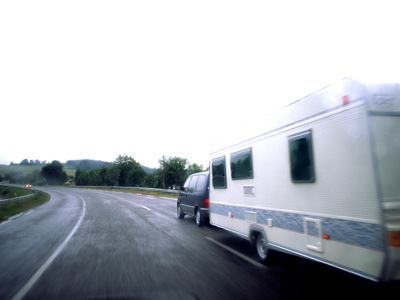 Braking while towing a trailer can present a challenge for even the most experienced driver. Yet, as it turns out, the most effective way to prevent loss of control while towing a trailer is a page right out of the driver's education handbook -- slow down. This is even more important when braking while towing. It takes a lot longer to stop -- and you travel a lot farther -- when you have hundreds, or even thousands, of pounds of trailer weight behind your vehicle. Give yourself plenty of stopping distance, far more than you think you will need, and you'll decrease the chances of finding yourself in a dangerous position that no one wants to be in -- a panic stop while towing a trailer.

Another simple, yet effective, tip -- concentrate on the road ahead. A big part of towing safety involves being alert and giving yourself as much room as possible between you and the vehicle in front of you. If you remain focused, you can easily maintain the distance necessary to gently and evenly apply the brakes to bring your vehicle (and trailer) to a safe stop -- even if the vehicle in front of you comes to a sudden standstill.

Towing with a vehicle that has a manual transmission gives you an additional option. If the vehicle speed permits, you may choose to downshift prior to applying the brakes. As an added benefit, if you slow down this way, the brakes are also less likely to overheat and fail. But once again, you'll need the space between you and the vehicle ahead of you to have the time and distance to react. Overall, it's important to remember that keeping your speeds lower when you're towing a trailer is one of the best ways to maintain control.

To read more about braking safety, towing and other related topics, follow the links on the next page. They can provide you with a lot more information.

How Travel Trailer Towing Works
Is there a green way to tow?
How to Shift While Towing