How to Pass While Towing 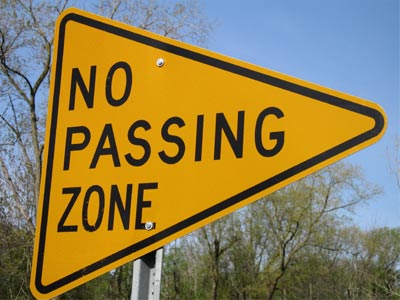 Most drivers can relate to the frustration of following a cement mixer or even a huge recreational vehicle over a steep, seemingly never-ending mountain highway, or possibly down a twisty, single-lane country road. There's no place to go -- you're stuck. The vehicle in front of you is moving at a snail's pace, and for a reasonable amount of time, you're patient. "Surely this guy is going to turn off," you think to yourself. But as mile after mile ticks away on your odometer, you realize that you're simply stuck where you are right now -- staring at the back end of a giant camper with tourism stickers from all 50 states.

It's time to do something about this. First, you make a few tentative moves to the edge of your lane, avoiding oncoming traffic as you do, just to see if you can survey the situation ahead of the camper. It's exactly as you suspected: The trailer is the only thing standing between you, the open road ahead and the posted speed limit -- which happens to be nearly double the speed that you're traveling right now. Just as you have so many times in the past, you safely and successfully accelerate around the lumbering dinosaur and slip back into the correct traffic lane. Just as simple as that, you're back on schedule.

Now imagine that the shoe is on the other foot. Well, maybe not completely on the other foot, because we want to find out what it takes to be able to pass while towing. So, in the new scenario, imagine that you're driving a pickup truck that's pulling a large camper, one that's several feet longer than your tow vehicle, as a matter of fact. Now imagine that you're on that same two-lane country road. About a quarter of a mile ahead, you see that a farmer has just entered the roadway hauling a trailer full of freshly cut hay. It's a slow-moving rig, so you quickly find yourself approaching the farmer's rear bumper. Now, of course you're excited to get to your lake property to begin the long weekend of camping, backpacking and boating; however, there's just one thing in your way -- this load of hay.

It's important to understand that you might not be able to handle this situation the same way you would in your sleek sedan. Passing while towing is an entirely different ballgame. In fact, as you'll find out on the next page, there are times when passing may not even be an option -- at least not a safe option.

Precautions for Passing While Towing 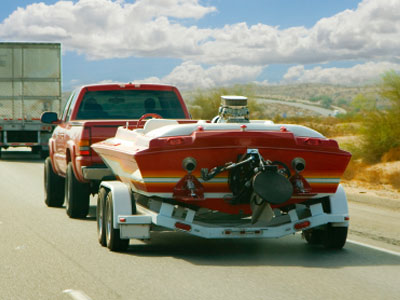 Is this driver planning to pass?
TIM MCCAIG/iStockphoto

Even if you're pulling a heavy trailer down the road, there may be times when you encounter slower traffic. Maybe it's a heavy piece of construction equipment or that trailer overloaded with hay that we just mentioned. Whatever the situation may be, you will probably be tempted to pass. Sometimes, passing is an appropriate action; other times, it may not be so wise.

Of course, there are always going to be unlimited variables in every passing situation. These may include environmental issues like rain, glaring sunlight or even high winds, but in general, you should keep the following few key points in mind when you're passing while towing:

To read more about passing while towing, safety and other related topics, follow the links on the next page.

How to Avoid Jackknifing
Why is it so difficult to back up a trailer?
Motorcycle and ATV Towing Regulations