A New Kind of Luxury Coupe 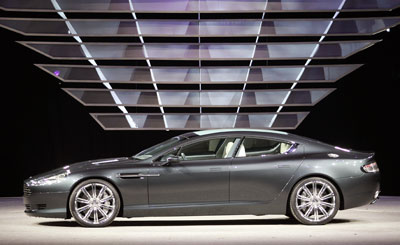 The Rapide Concept from Aston Martin is shown on Jan. 9, 2006, during the press days at the North American International Auto Show at Cobo Hall in Detroit, Mich.
Jeff Haynes/AFP/Getty Images

Although the Rapide is a high-performance coupe, that doesn't mean Aston Martin sacrificed any comfort on the inside. Coupes are traditionally sporty, two-door vehicles, but they still have four seats -- enough room for two seats up front and two in the back. That space is still pretty tight, however, since the length and overall proportions of the car affect its performance. The shorter the length, the less distance air has to travel over the top of the car, meaning the car will be able to perform faster and more efficiently.

Since the developers adjusted the horsepower of the Rapide's engine after stretching out the body, they could afford to add two more doors and keep the back seats spacious and comfortable. The eventual outcome is a coupe that can perform at high speeds over a variety of terrains and still make the journey seem like it takes place in a comfortable urban luxury vehicle.

The leather seats of the Rapide are made with a special kind of hide called shagreen, made from the skins of sharks or rays. The passengers don't have to just sit back in their smooth seats and enjoy the ride, either -- many controls available to the driver are also in front of the other seats. A satellite navigation system with hand-held Bluetooth technology is accessible to everyone in the Rapide, finally putting the age-old question of "Are we there yet?" to rest. The back of both front seat headrests come installed with DVD screens, along with personal audio and environmental system controls. Again, this should keep repetitive questions to a minimum.

The sunroof of the Rapide opens up the interior even more, as it's constructed from transparent polycarbonate material and stretches the length of all four seats. To top off all of this excess, the trunk -- or boot, as the British call it -- of the Rapide concept is installed with the perfect picnic set, a chiller cabinet built to hold a single bottle of champagne and four glasses.

It looks as though automakers are pulling in two separate directions -- while designs for tiny, space-efficient makes like the Smart Car and the IQ Car­ are gaining popularity in Europe, luxury car companies are seeing how big they can go. Aston Martin isn't the only brand toying with a longer concept, as the Rapide is in competition with bigger models like the Mercedes CLS and the Porsche Panamera. Even the designers of the new MINI Cooper have stretched out a traditionally small model -- its name appears to play on the word "coupe."

Whatever direction Aston Martin has taken recently, it seems to have brought the company out of yet another funk, and the Rapide may help them out even more. The company plans to produce between 1,000 and 2,000 Rapides annually and bring their overall annual production to about 7,000 -- much better numbers than Lagonda Rapide from the 1960s.

For more information on Aston Martin and other car-related articles, see the next page.