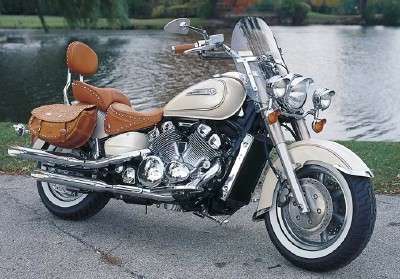 The 1997 Yamaha Royal Star Palamino Edition motorcycle was set apart from other cruisers not only by its styling details, but also by its engine configuration.

Yamaha's late 1990s interpretation of the cruiser concept differed from that of most other manufacturers, particularly in the engine department.

Whereas the traditional formula called for a 45-degree V-twin, this Japanese company chose a different route.

First of all, it's not a V-twin at all, but rather a V-four. Cylinder banks of the 1300-cc engine are separated by 70 degrees, and each is topped with double-overhead cams.

Though the cylinders have fins cast into them, the engine is primarily water cooled. And final drive is by shaft.

Elsewhere the Royal Star is perhaps more conventional, though the unusual cast spoke wheels are almost completely hidden by the large brake discs.

But what really sets the 1997 Yamaha Royal Star Palamino Edition motorcycle apart are the fine details.

Cream opalescent paint is accented with tan imitation leather on the seat, saddlebags, and tank strap, all of which are also studded. Even the hand grips are covered in matching material, and chrome trim abounds.

With its early-1980s Virago, Yamaha was the first Japanese company to hit the market with a cruiser-style bike. But the Royal Star led the concept into the 21st Century. 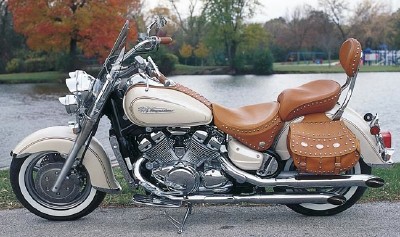 Though it looks like a wide-angle, air-cooled V-twin, the Royal Star's engine is a water-cooled V-four.