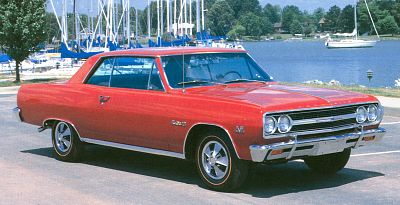 The A-body Chevelle was the mid-size offering from Chevrolet in the 1960s. See more classic car pictures.
©2007 Publications International, Ltd.

As American car buyers took a fancy to the mid-size phenomenon of the mid-1960s, Chevrolet was left with a gap in its lineup. Bel Airs and Impalas were too big for some; Chevy II and Corvair too tiny. The answer came in the form of the A-body Chevelle, traditional in both engineering and upright styling -- actually harking back in size and shape to the "classic" 1955-1957 models.

Apart from curved side glass, little was extraordinary about these first Chevelles, which rode a perimeter-type frame with 115-inch wheelbase. Base engine was a 120-bhp Hi-Thrift 194-cid six; optional was a larger (230-cid) six developing 155 bhp.

Ah, but either of those sixes left a promising expanse of space under the hood, space that could easily accommodate a V-8-which it did: Chevrolet's long-familiar 283-cid V-8, to be exact, with a moderate 195 horses at the ready.

Add dual exhausts and a four-barrel carburetor, and the rating rose to 220 bhp. Just as interesting was the availability of a four-speed gearbox in place of the usual three-speed, overdrive, or Powerglide.

That wasn't all. "Everyone has a bit of swashbuckler in him," warned the sales catalog, a trait that could be indulged by purchasing a Super Sport. Offered on the top-rung Malibu Sport Coupe (hardtop) and convertible, the $162 SS package was similar to Impala's, including a black or white vinyl interior, front bucket seats, quartet of gauges, console, and radial-pattern wheel covers.

A fist-size ball atop the four-speed's gearshift suggested the car's intended audience, though a tachometer cost extra. A heavy-duty suspension added less than five dollars.

Close to half of the Malibu coupes and convertibles built for 1964 had Super Sport equipment. Performance with the 283, if not exactly overwhelming, qualified as respectable. Motor Trend sent a 220-bhp edition with four-speed to 60 mph in 9.7 seconds, completing the quarter-mile in 17.5 seconds.