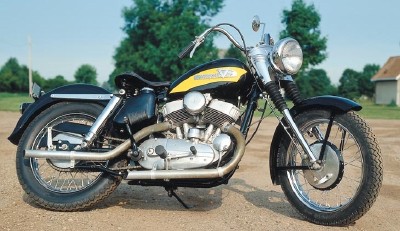 In an effort to compete with the popularity of the vertical twins arriving from Europe, the 1956 Harley-Davidson KHK motorcycle was built with a more advanced design and a larger V-twin, giving riders greater performance.

Introduced in 1952 to replace the aging WL, the K series incorporated a couple of Harley "firsts." Aside from the little S-125, which was actually a DKW of Germany design, the K introduced unit construction to the marque, and was the first of its street machines to boast rear suspension.

Though the K was powered by a 45-cubic-inch flathead like the WL, it was of a more advanced design and housed the transmission in the same case as the engine. Telescopic forks replaced the WL's leading-link arrangement, while a swingarm rear suspension was cushioned by enclosed coil-over shocks.

By 1954, the K series became the KH as the V-twin grew to 55 cubic inches (about 900 ccs), providing riders greater performance in an effort to compete with the onslaught of vertical twins arriving from Europe.

A "K" suffix added to the model name indicated the machine was equipped with lower handlebars, less chrome trim, and more performance-oriented camshafts.

But the K and KH were really stopgap measures until the overhead-valve Sportster could be readied, which would happen for 1957.

Therefore, this 1956 KHK was the last of the breed, and aside from the three-wheeled Servi-Car, represents the final flathead motorcycles Harley-Davidson would ever produce.

Check out the next page to see more 1956 Harley-Davidson KHK pictures. 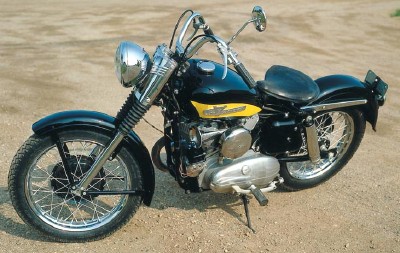 The K series replaced the aging WL and was the first street HarleY with a rear suspension.

The May 1956 cover of Harley-Davidson's The Enthusiast magazine featured Elvis Presley on his 1956 KH.
The KH carried a chrome upper fork cover.
The unit-construction flathead V-twin formed the basis for Harley's upcoming overhead-valve Sportster engine.
A 1956 ad featuring a KH depicts the entire