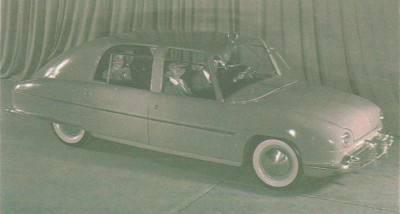 As World War II came to a close, and with it a drop in demand for military aircraft, the airplane manufacturer Beech Aircraft Corporation decided to take a stab at the auto industry. Its first -- and only -- try was the 1946 Beechcraft Plainsman concept car.

Cars are obviously quite different from aircraft, yet corporate experience with one can encourage a flirtation with the other. Henry Ford, for example, put America on wheels with his beloved Model T, made a fortune, and went on to produce the all-metal Tri-Motor passenger plane.

Henry's venture into flight was no mere dalliance, for his "Tin Goose" gained a stature equal to that of the Model T and helped launched regular U.S. airline service in the 1920s.

Abroad, BMW was famous for aero engines long before it built cars. So, too, was Bristol of England, which didn't turn to automaking until the late 1940s -- and with prewar BMWs at that.

Other firms like Daimler-Benz, Hispano-Suiza, and even Rolls-Royce were involved simultaneously with cars and aircraft at various times. So there was plenty of precedent for the 1946 Beechcraft Plainsman, "an aircraft manufacturer's idea of what an automobile should be."

Development of the 1946 Beechcraft Plainsman concept car began in late 1945, not long after V-J Day. America was still savoring final victory over the Axis, and American consumers -- denied new cars for nearly four years -- were ready to buy.

The result was a frenzied seller's market that attracted all manner of would-be auto tycoons, who reasoned that all they needed to succeed were a little money and lots of chutzpah.

The Beechcraft Plainsman surfaced in 1946, looking like one of those wildly predictive "cars of the future" that were staple elements of wartime and postwar tech magazines.

The car was novel, all right, but Beech Aircraft Corporation had a more critical motive for eyeing the automobile business: survival. Like other aviation companies in 1945-1946, Beech faced life with no new military contracts at hand and dim prospects for civilian aviation sales.

Accordingly, the firm spent $50,000 to devise a "super-modern" passenger car that might conceivably save the corporate neck should aero sales stay grounded. It might even teach Detroit a thing or two.

See the next section for details on the 1946 Beechcraft Plainsman concept car. 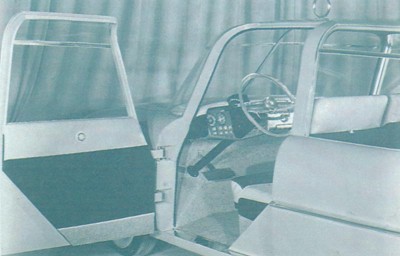 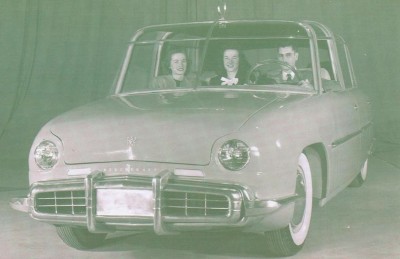 The Plainsman concept car had a grille in front, even though the engine was in the rear. The car was designed so a front engine could be used just as easily if desired.
2007 Publications International, Ltd.

Though the Plainsman wore a conventional grille, it carried a rear-mounted engine: an air-cooled, horizontally opposed gasoline four adapted from one of Beech's contemporary aircraft units.

But the compact powerplant could have been up front just as well. Not only was there plenty of room for it, but Beech planned on using an innovative four-wheel electric drive system that completely eliminated the differential, propshaft, clutch, and transmission (and with the last, the interior floor hump, thus adding to passenger room).

Exact details of this patented system were never disclosed -- likely because it was patented -- but it's known to have worked from a generator driven by the engine and housed in the same soundproof compartment.

Wheel control was evidently independent, because Beech claimed two advantages for its electric drive: automatic apportioning of torque to those wheels with greater grip on slippery roads -- call it embryonic traction

control -- and a "reverse current" feature that provided "dynamic braking" when the driver stepped on the pedal-a sort of early anti-lock system. Naturally, there were also regular hydraulic drum brakes, activated by a slightly harder push on the same pedal.

Only a bit less novel was the Beechcraft Plainsman's air-spring suspension. Unlike later Detroit "air ride" setups that relied on flexible bladders, this one employed aircraft-type air shocks that automatically adjusted damping to suit load and weight distribution.

A manual override switch was planned to permit selecting a softer setting for a smoother ride on very rough roads. Though not known for sure, the damping rate was probably varied by the drive system's electric generator.

Coming from an aircraft maker, the Beechcraft Plainsman was predictably designed for low weight and good aerodynamics in the interests of both performance and economy. Aluminum was chosen for exterior panels and inner structure, and the shape was tested in the wind tunnel with impressive results.

According to Beech, the Plainsman would top 160 mph despite its relatively small engine yet return more than 25 miles per gallon at a steady 60 mph and about 30 mpg at town speeds. Company engineers credited this efficiency more to the electric drive than to the styling, which hardly looked "wind-cheating" anyway.

Despite a small engine, the Beechcraft Plainsman was claimed capable of over 160 mph and up to 30 mpg.
2007 Publications International, Ltd.

Acceleration, on the other hand, was claimed to be "considerably greater than that of the best conventional automobiles."

So why didn't the Beechcraft Plainsman make it to production? Find out in our final section.

Once military aircraft orders started flowing in again, Beech had no need to try the car business, so it abandoned the Plainsman by late 1946.
2007 Publications International, Ltd.

The fate of the 1946 Beechcraft Plainsman concept car wasn't a sad one, not for Beech, at least.

Beech did go so far as to set a price for a production version of the 1946 Beechcraft Plainsman: $4,000-$5,000. That was lofty for 1946, and would surely have meant few sales. That kind of money bought a Cadillac limousine in 1946, but the sum might have come down to more realistic levels with really high-volume production, which Beech certainly could have managed.

Postwar upstart Kaiser-Frazer may have grabbed the world's largest factory when it leased the wartime Ford bomber plant in Willow Run, Michigan, but the Beech complex in Wichita wasn't much smaller at almost a million square feet total, with about three-fourths of it dedicated solely to manufacturing.

Ultimately, of course, Beech had no need to build the Plainsman or any other automobile. By late 1947 it was flying high again on $22.5 million in new government orders prompted by the onset of the Cold War and political crises in Berlin, Palestine, India, and China.

With that, Beech abandoned its automaking ambitions and apparently never looked back. It was just as well. Within three years the Tucker was a bad dream, Kaiser-Frazer was struggling to recover from management blunders, and even established independents were showing signs of distress.

In the end, Beech was lucky that events turned as they did. Innovative though it was, the 1946 Beechcraft Plainsman concept car might have developed into a major corporate headache had it gone into production. After all, the aircraft business involves war only part of the time, while the car business is almost always hell on wheels. Just ask your friendly local Edsel dealer.