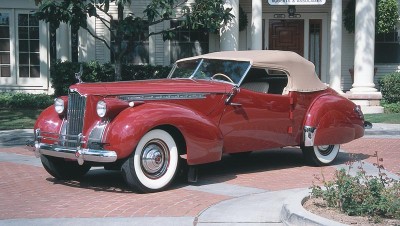 Howard Darrin's Victoria, after receiving Packard's blessing, was built on a 1940 One Eighty chassis. See more pictures of Packard cars.

There was no place for Dutch Darrin, customizer of the 1940 Packard One Eighty, to go but home.

After 15 glorious years of designing exclusive full-custom automobile bodies in Paris -- first in partnership with fellow American Thomas Hibbard, then with a banker named Fernandez -- he sensed the day of such highly individualized motor cars was passing. So, in 1937, Howard Addi­son Darrin, born 40 years earlier in Cranford, New Jersey, forsook the "City of Lights" for the "City of Angels."

Darrin set up in Holly­wood, there to fashion customized variations of production cars he felt would appeal primarily to the free-spending film community. One of his early ideas was to cut the roof off of a "junior" Packard Eight/One Twenty coupe, replace it with a convertible top, and lower the hoodline.

This he did several times for a client list that would have made for quite a fine credit roll at the end of a Tinseltown blockbuster. Then the Packard Motor Car Com­pany, that proper bastion of luxury-class motoring located in hard-working Detroit, got wind of what Dutch Darrin was doing in sun-drenched, fun-loving California.

Packard management elected to give its sanction to Darrin's efforts, carrying the custom models (which also included a four-door convertible and a notchback four-door sedan) in its 1940 catalog and placing a chrome script of Darrin's signature on the cars.

But there were conditions. Dutch favored the One Twenty for being light and easy to modify, but the company wanted him to build most of the cars on the Custom Super Eight (or One Eighty) chassis. The $4,593 Convertible Victoria, as the two-door soft top was billed, rode a 127-inch wheelbase.

Aside from sectioning the hood and radiator shell to lower its profile, the Vic­toria had cut-down doors. Despite the "roadster" look of its thin windshield frame, it was a true convertible with roll-up side windows. The Darrins were the first Packards without running boards. Initially built in the former Auburn body plant in Indi­ana, production later shifted to Ohio funeral-car builder Sayers & Scoville. Victorias were made until 1942.

The restored 1940 Darrin Victoria featured here is owned by David Miller, of Orange, California. It is powered by a 356-cubic-inch L-head straight-eight engine. The powerplant's 160 horsepower are driven through a three-speed transmission with overdrive.