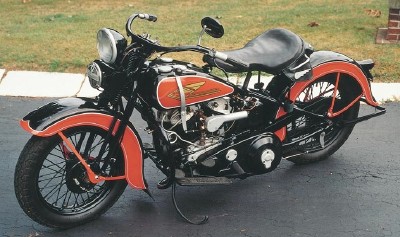 The 1934 Harley-Davidson VLD was one of the products that kept Harley afloat during the Great Depression. See more motorcycle pictures.

The 1934 Harley-Davidson VLD motorcycle was a bold new design for one of the few motorcycle companies not ruined by the stock market crash of 1929.

Harley's traditional Olive Green paint -- which had been used with little variation since 1917 -- was dropped as the standard color after 1932. It was replaced by more vibrant two-tones such as the black and Orlando Orange of our featured machine. Green, however, remained available for traditionalists.

Flathead V-twins, which had replaced F-head versions in the late 1920s, came in 45- and "Big Twin" 74-cubic-inch versions.

These were landmark engines; the 45 would continue to power three-wheeled Servi-Cars into the Seventies, and the Big Twin would form the basis for the famous EL overhead-valve "Knucklehead" of 1936.

Triggered by a stock-market crash on October 29, 1929, the Great Depression killed off all the major U.S. motorcycle manufacturers save for Harley-Davidson and Indian. And despite decreased competition, even those makes teetered on the brink of extinction.

But Harley had a strong dealer network and the right products at the right time, and things were beginning to look up by 1934.

Harley's two-place Buddy Seat with sprung seatpost arrived in 1933, quickly becoming one of the company's most popular accessories. Previously, passengers rode on a separate seat, usually mounted to the luggage rack.

For more pictures of the 1934 Harley-Davidson VLD motorcycle, go to the next page. 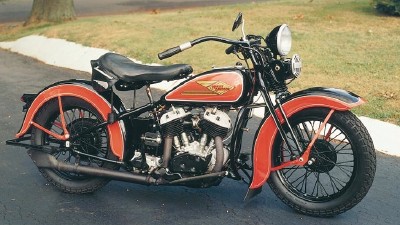 VLDs were available in vibrant colors, such as this black and orange.

Despite the introduction of the more modern "Knucklehead" Big Twin in 1936, the flathead version would live on into the late 1940s.
The taillight section of the rear fender was hinged to swing up for tire changes.