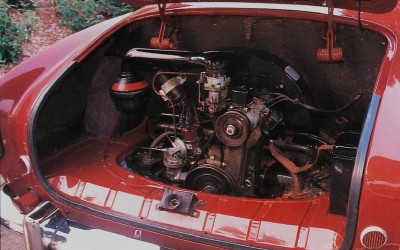 The Karmann-Ghia used the air-cooled horizontally opposed VW Beetle 4-cylinder engine. Horsepower ranged from 36 in 1955 to 60 by 1971.
© Thomas Glatch

When it came to the Volkswagen Karmann-Ghia engine and body, supply lines diverged. The engine was pure VW Beetle. The body was something else entirely.

Changes from the Beetle's powertrain and chassis were minimal. The chassis side rails were widened to accommodate the body, which at 64.2 inches, was four inches wider than the Bug's, and a front anti-sway bar was added to the suspension. The angle of the steering column was changed, there were different springs and dampers, and the gearshift lever was shortened.

Under the rear engine cover was the standard VW air-cooled four-cylinder boxer engine. It was rated at the same 36 horsepower as in the Beetle, though minor relocation of components in the engine bay was necessary to get it to fit under the coupe's lower bodywork.

Launched in 1955 in Europe and the following year in the U.S., this clearly was a different type of VW, and it soon generated its own clientele. The bodywork of course was the big draw. The coupe was three inches longer than the Beetle, but nearly seven inches lower.

Design-house style touches included curved glass all around in a day when that was rare, frameless one-piece door glass, and tastefully applied chrome trim.

Was it a beautiful car? Was it even a pretty one? Some pundits damned it with faint praise, describing it as "ideal for the ladies." At the extreme, a few asked if it was the most attractive car in the world.

With a curb weight of around 1,750 pounds, the Karmann-Ghia coupe was about 150 pounds heavier than a Beetle sedan. Part of the additional weight came from the added width of the Karmann's body, which gave it nearly six more inches of front hip room than the Beetle.

Despite the lower roofline, front headroom was more than adequate for tall people. The front seats were wide and well padded, but being a true 2+2, the Karmann-Ghia had to make do with a nominal two-place rear seat--really not much more than a padded cushion just 41 inches across. It did fold down into a cargo platform and, combined with a seven-cubic-foot forward luggage bay, gave the coupe more carrying capacity than the contemporary Beetle sedan.

The dashboard used Beetle switchgear, but was more stylish and mounted a huge clock next to the speedometer (a fuel gauge wasn't added until 1958). A floor lever controlled the heater, which didn't warm the car on cold days any better than did its sister system in the Beetle. Fresh-air ventilation was inferior to that of the Bug because the coupe lacked vent windows.

Some Karmann-Ghia fans argued that build quality was even better than that of the Beetle because Karmann didn't have to churn out the cars as quickly as VW had to pump out Beetles. Suffice it to say that neither was matched by anything else in the price class, though Karmann-Ghias did rust more quickly than Beetles.

This was because Karmann lacked the equipment to stamp out large body panels and instead fashioned certain areas of the body with lots of smaller panels and the resulting joints and seams were susceptible to corrosion.

Go to the next page to find out how the Karmann-Ghia felt from behind the wheel, and the impact a new one would have on your bank account.