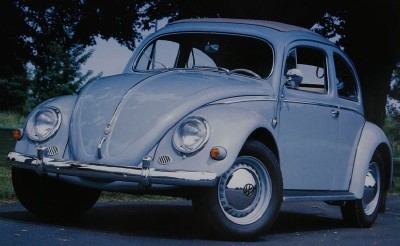 The Volkswagen Beetle outgrew its origins as simple transportation and became a 20th century icon. This 1956 model wears the shape that defied time.
2007 Publications International, Ltd.

The Volkswagen Beetle is as much a social phenomenon as it is an automobile. The links at the bottom of this page will take you to articles and photos that celebrate this little giant from its pre-World War II beginnings to today's retro New Beetle models.

Learn about the 1930s Volkswagen Beetle, born as an instrument of Adolph Hitler's Nazi plan. Check out how the Bug barely survived World War II and how the 1950s Beetle spread the message of quality, low-cost transportation.

The original Volkswagen Beetle ended production in the 1980s and was reborn as the retro 1998 Volkswagen New Beetle. Pictured is a 2006 New Beetle convertible.
2007 Publications International, Ltd.