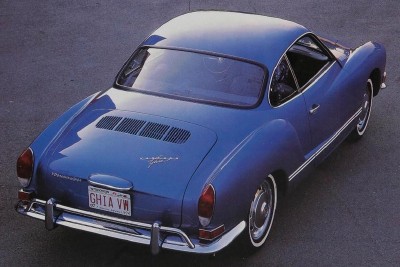 With a sleek body over a humble VW Beetle chassis, the Volkswagen Karmann-Ghia furnished a dash of sports-car spirit at a Volkswagen price.
© Thomas Glatch

Indeed, it seemed to make little obvious marketing sense when the German company sprung on the world the sinuously shaped Volkswagen Karmann-Ghia coupe in 1955. By 1974, however, when the last Volkswagen Karmann-Ghias were delivered to the U.S., 387,975 had been built, a fine number for a specialty car from an automaker not known at the time for driving excitement.

The car's name summarizes a very complicated pedigree. VW in the early 1950s was a rapidly growing West German carmaker. Karmann was a long-established West German coachbuilder and already was building Beetle convertibles. Ghia was a top Italian styling house.

Added to this alliance was an American connection -- one that some Europeans are reluctant to admit even today -- and the result was an unlikely recipe for success.

The Volkswagen Karmann-Ghia story starts with Mario Boano and Luigi Segre of Carrozzeria Ghia. The Turin coachbuilders had done some confidential work for VW, suggesting refinements in Beetle styling that VW mostly ignored. Neither did VW seem to like any of the various Beetle proposals put forth in Germany by Dr. Wilhelm Karmann. An increasingly discouraged Karmann approached Ghia for inspiration.

Gian Paolo Boano, Mario Boano's son, had recently bought a Beetle in Paris and driven it to Turin. The Ghia craftsmen removed the conventional two-door Beetle body, and within five months had replaced it with a newly fashioned coupe body shell.

The prototype was transported to Karmann's factory in Osnabruck where, on November 16, 1953, it was examined by VW executives, including top man Heinz Nordhoff. The VW people were intrigued, and wanted to know more, especially about the styling. They'd be surprised to know its geniuses.

The sporty VW took its name from Karmann, the German firm that built the body, and Ghia, the Italian design house that came up with the styling.
© Vince Manocchi

Go to the next page to learn more about the origins of the Volkswagen Karmann-Ghia.