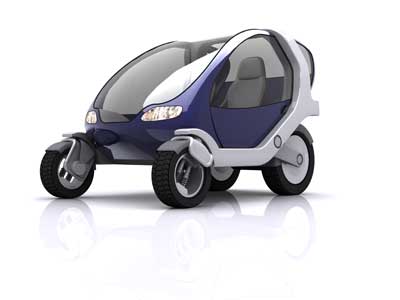 If you look at a typical automobile, you'll notice that the engine, suspension system, axles and steering column take up a great deal of space. Creating a smaller car means either creating smaller versions of these components or creating new mechanisms that provide the same functions. The team of designers at MIT Media Lab Smart Cities group chose to solve this problem by putting the responsibility of all of these components into what they call robot wheels.

Each of the vehicle's four wheel assemblies is a self-contained mobile unit, supplying its own motor, suspension, brakes and steering. Each robot wheel has only two outside needs: electricity (supplied by the car's battery) and digital data to tell the wheels what to do. In a traditional car, the steering wheel physically turns a steering gear, which in turn directs the front wheels in the chosen direction. The City Car, however, will use a drive-by-wire system. The steering wheel won't physically turn anything -- it'll just send the information to the self-steering wheel assemblies.

This Swiss motor wheel operated in a similar fashion to modern hubless wheels that are found on various concept vehicles. The outer wheel turns by the movement of a gear set in its interior.
Fox Photos/Hulton Archive/Getty Images

The robot wheels would work in unison, allowing the car to rotate 360 degrees [source: Mack]. This provides an incredible degree of maneuverability, such as allowing drivers to parallel park by simply driving sideways.

There's more to the City Car than amazing wheels and a folding axis. On the next page, we'll look at the ways in which its designers hope to protect drivers, allow customization and even enable vehicles to talk to one another.