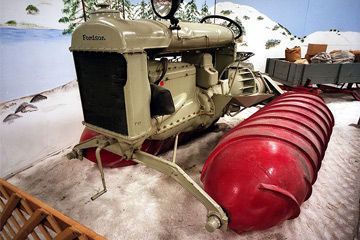 A 1926 Fordson screw-drive tractor on display at the Hays Antique Truck Museum in Woodland, Calif.
Photo courtesy of Killiondude

Where would we be without the good-old wheel? It allows us to travel over hard-packed surfaces like dirt paths and paved roads with ease and speed, and it's been doing a pretty good job of it for thousands of years.

Unfortunately, our friend the wheel has never been a really great performer in mud, snow or water, because these media don't provide a firm enough surface to push against the way solid ground does. The lack of resistance with these surfaces is actually a hindrance to traversing through them.

But over the years, several vehicle makers have come up with a solution that appears -- well, downright screwy. In fact, it is screwy. These contraptions move through semi-viscous material like snow and mud in just the way a screw is propelled through wood.

In this article we'll explore how screw-drive vehicles work, their history and how they perform under off-road conditions that would make even a Humvee "say uncle."

If you're a faithful HowStuffWorks.com reader, then you know the "drill:" read the next page to learn about screw-drive vehicle design. 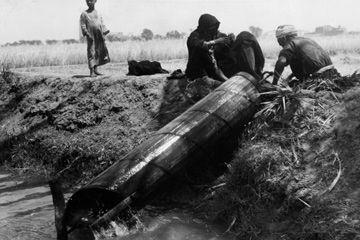 An Archimedes screw being used to irrigate crops on the Nile Delta. The device, invented by Archimedes during a stay in Egypt, works as a hydraulic screw to raise water from a lower level.
J W Thomas/Getty Images

Screw-drive vehicles have one feature in particular that stands out to give them their strange appearance. Instead of wheels, they're outfitted with a pair of large, long cylinders with screw-like threads running the length of each.

Atop the cylinders sits the driver's and passenger seating area or compartment, along with some type of engine. The engine itself is mated to the screw cylinders by shafts or chains or other mechanical means to turn them in counter-rotating directions. By making the screws turn in opposite directions from one another, the vehicles can achieve forward (or backward) motion. If turned in the same direction, the screws propel the machine sideways.

These vehicles work on a principle called Archimedes Screw. It basically holds that, by wrapping a plane (flat surface) around an enclosed pole on an incline and rotating that assembly, you can move liquids or loose materials -- "suspended solids" -- upward, against the force of gravity. It has been thought that such devices were used to water the famed hanging gardens in ancient Babylon. Today they're used for irrigation, for draining submerged areas so that they can be used as land and for moving semi-solids, like grain…or even sewage!

While not completely immersed in mud, snow, or water, screw-drive vehicles are able to push enough of the material to attain motion. So it's something of an Archimedes Screw in reverse. As a bonus, since the cylinders are hollow, they can also act as floats.

To control a screw-drive vehicle, an operator applies more power to either the left or right screw, depending on which direction the driver wants to turn. Screw-drive vehicles can even be made to scuttle sideways, like a crab.

While they may be remarkable works of engineering, let's face it, the screw-drive vehicles invented thus far are likely not going to be winning any automotive beauty contests. From the utilitarian Armstead Snow Motor, which was based on a Fordson farm tractor, to the Soviet-era ZiL-29061, these beasts were built to survive in environments that were wet, sticky, impassable to other vehicles and perhaps even a bit gross. So on each of these unique vehicles, the designers seemed willing to sacrifice good looks for ruggedness.

Keep reading to learn about some of the more noted screw-drive vehicles of the past century. 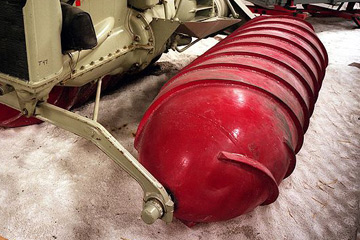 A closer view of the screw-like threads on the 1926 Fordson screw-drive tractor.
Photo courtesy of Killiondude

The record is a bit sketchy when it comes to these machines' beginnings. But among the first-published designs for a screw-drive vehicle was that of Jacob Morath, a Swiss immigrant to the United States who patented a twin-screw ploughing machine in 1899.

Perhaps one of the most highly exposed of these not-so-well-known screw-propelled machines was the Armstead Snow Machine, also known as the Snow Devil. A highly circulated online video shows this screw-driven machine performing various feats in deep snow that confounds other means of transportation -- including one poor horse.

For all its skill in wet snow, the Armstead, a Fordson tractor conversion, apparently had some difficulty in extreme northern climes. The cold, dry snow of Alaska gave the machine a hard time, according to Alaska's Fountainhead Antique Auto Museum, which acquired a number of the machines and their stories [source: Fountainhead Antique Auto Museum].

Military forces have also shown at least a passing interest in screw locomotion over the years. Nazi Germany investigated a screw-propelled machine to navigate the snowy Eastern front -- tanks would often sink in the snow and get stuck. The screw-driven machine, invented by Johannes Raedel, never went into production. The United States military briefly considered a screw-drive design for its "Weasel" small transport for Special Forces during World War II before settling on a tracked design.

And during the Cold War, the then-Soviet Union's ZiL automotive company built one of the most intimidating screw-drive vehicles of all. The ZiL-29061, with its angular lines and massive twin drive screws, looked like a vehicle straight from the apocalypse. You can find videos of it, too, circulating online. The ZiL was built to fetch Soviet cosmonauts after they landed in places that were for other vehicles too forbidding, like the far reaches of Siberia.

You can even find screw-drive vehicles in use today. They're used in industrial and mining applications to traverse sloppy terrain and to break up muddy expanses of clay so that it dries more quickly.

To find out about screw-drive vehicles' performance capabilities -- what they can and can't do -- read the next page. 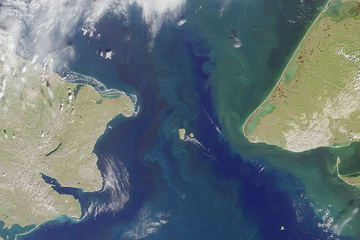 The Bering Strait, separating Siberia from Alaska in the North Pacific.
Photo courtesy of NASA

As you're probably figuring out, screw-drive vehicles are highly specialized machines. As such, they're extremely good at performing a narrow set of tasks. And they're pretty lousy at everything else, like going to the supermarket to get groceries (unless your supermarket happens to be in a swamp or a snow-covered wasteland).

In their natural elements of muck and slush, some screw-propelled machines can reach forward speeds of 7.5 to 10 miles per hour (12 to 16 kilometers per hour). Just as an example, the Armstead/Fordson zipped along in deep and heavy snow but struggled in the powdery stuff. It was also a notoriously ravenous consumer of fuel. On the up side, it could reportedly haul (again, on snow) 20 tons (18,144 kilograms) of cargo, such as logs, by towing it on one or more sleds. Screw drives tend to work well on heavy snow, in mud, even on ice or marshland. But they can't truly be considered "all-terrain" vehicles, because ironically, on normal roads they're pretty abysmal.

Perhaps the most celebrated use of a screw-driven vehicle in modern times was the crossing of the treacherous Bering Strait by two adventurers from the United Kingdom in 2002 (in their second attempt). This "Ice Challenger" expedition was the first crossing of the hazardous connection between the United States and Russia by a land-based vehicle.

Numerous hazards make the crossing potentially deadly -- ice floes that can severely damage ships, patchy ice that can collapse into the sea under the weight of a vehicle and even polar bears. But Steve Brooks and Graham Stratford performed the crossing in their Snowbird 6 -- an amphibious vehicle that ran on tracks while on snow and solid ice and used its outrigger-style screws to float and propel itself through water. The screws also helped the Snowbird 6 to clamber out of the water and back onto the ice.

For more information about screw-drive vehicles and other vehicles that tread off the beaten path, follow the links on the next page.

Top 10 Speeds Clocked on the Autobahn
Could Electric Motor Conversions Save Classic Cars?
10 Fastest Cars in the World