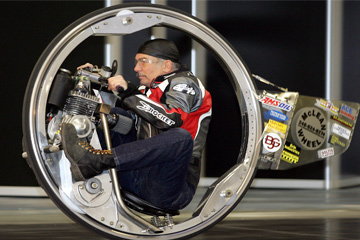 There are many vehicles in this world that are worthy of the phrase, "You would have to be insane to drive that."

Take the 638-horsepower Corvette ZR1, for example, or the 200-mile per hour (321-kilometer per hour) Suzuki Hayabusa GSX-1300R. If that's not crazy enough for you, there's the three-wheel Campagna T-Rex, a tricycle that will outrun most sports cars.

What's that? Vehicles with four, two and even three wheels aren't extreme enough for you? How about something with just one wheel? Welcome to the exotic world of the monowheel -- a one-wheeled motorized vehicle. Unlike a unicycle, however, the driver of a monowheel actually sits inside, or sometimes next to, the wheel.

A monowheel looks like something out of a science fiction film, with its rider crouched inside and exposed to the elements while the giant wheel spins. It's kind of like a hamster wheel, except it's powered by a small engine. But monowheels are in fact real, and while they're mainly used for entertainment purposes today, for a short time, some people believed they could be viable forms of transportation.

The idea may sound extreme, but the science behind monowheels is solid, using many of the same principles that a bicycle or unicycle use to stay in motion and upright. But handling and braking are another story.

In this article, we'll take a close look at monowheels -- where they come from, how they move, and who continues to build them today. And who knows? After this, that Hayabusa might not seem quite as exciting to you as it once was. 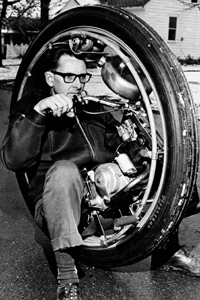 Inventor LaFrance Bressen saw an old poster from the 1920s showing a one-wheel motorcycle, so he built himself one in Galesburg, Mich. on Nov. 25, 1969. He sits inside a 36-inch wheel powered by a 50cc motorcycle engine.
AP Photo

A monowheel is different from a unicycle because the rider sits inside the wheel's circumference, rather than on top of it or outside it. Usually, a monowheel will have a circle-shaped frame with a moving track on the very outside, often made of rubber. Think of the track as a giant tire that surrounds the monowheel -- it's what's responsible for moving the vehicle forward.

How does it move? A monowheel works like a giant ball bearing. The driver and the engine anchor the inner wheel, while the engine propels the outer loop [source: Popular Mechanics]. It stays upright through the same principles as a gyroscope. As long as an external force generates motion -- in this case, an engine (although some monowheels are pedal-powered) -- the vehicle will stay in motion.

Of course, turning one of these is tricky, too. A monowheel's lack of other wheels and somewhat awkward stance makes handling difficult. A rider will typically want to keep his or her feet close to the ground so the monowheel doesn't tip over completely. In addition, if it has a powerful engine, it's unlikely that all of the power can be used in this kind of setup. Its lack of stability when forward motion is taken away makes braking especially difficult, too.

These (and a few other) attributes are what keep a monowheel from being the vehicle of the future as some people once thought it would be. You heard right -- at one time, there were predictions that vehicles with one wheel would replace cars and bikes on the road.

On the next page, we'll look at famous monowheel designs throughout the ages.

Monowheels have actually been around in one form or another since the 19th century. They began with an early bicycle design. After all, if something works with two wheels, could it also work with just one?

The first monowheel designs appeared as early as 1869. Several of these featured a seat for the rider with pedals connected to a small wheel, which was in turn connected to the outside wheel. The rider pedals the small wheel, and that drives the large wheel, creating motion. Even at that time, the monowheel was recognized as a difficult means of transportation: One publication remarked that the vehicle was "impracticable for ordinary mortals" (source: Museum of Retro Technology).

By the early 20th century, inventors were experimenting with monowheels powered by actual engines, including a 150cc single-cylinder engine prototype from 1910 that today sits in the Auto & Technik Museum in Germany. Some designers also built monowheels with airplane propellers up front to aid in steering. None of these designs ever became mass-produced.

In the 1930s, science magazines began featuring designs for car-like monowheels that were enclosed by metal and glass and could seat several people. One article even featured a monowheel tank equipped with a machine gun [source: Museum of Retro Technology].

For the next several decades, inventors would experiment with different monowheel designs -- although, arguably, not with the fervor that they had in the late 19th and early 20th centuries. By now, the drawbacks of a monowheel had been firmly established, and its practicality as an everyday vehicle for ordinary people was pretty much discounted.

But as you know, some ideas never die -- no matter how questionable they are. Up next, we'll look at monowheels today and concepts planned for the future. 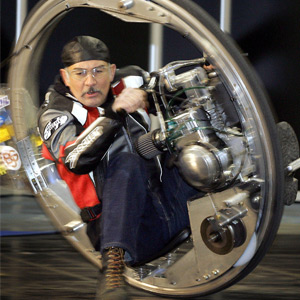 Today, monowheels are still around, though they aren't being floated as practical replacements for cars anymore. Many are built by hobbyists and amateur engineers and most are used for entertainment purposes.

Builder Kerry McLean created a monowheel powered by a Buick V-8 engine that's capable of more than 50 miles per hour (80.5 kilometers per hour). Amazingly, his creation is street-legal in all 50 states (but good luck explaining it to the police if you get pulled over for speeding.) McLean calls his monowheel the Rocket Roadster, and despite suffering a bad wipeout in one, McLean continues to build his unique vehicles to this day.

Another fun design comes from Jake Lyall, who created a contraption called the RIOT Wheel. This vehicle features an engine inside a huge tire, and the driver sits in a seat outside the wheel where he steers. When the RIOT Wheel is in motion, it keeps the seat upright and in the air. While Lyall built the monowheel for the Burning Man festival, he's working on other single-wheel projects, and is attempting to conquer the land speed record [source: The RIOT Wheel].

Despite its long history, the first commercially available monowheel went on sale in 2007. The Netherlands-built Wheelsurf is powered by a tiny, 31cc Honda four-stroke engine, and it's capable of speeds up to 25 miles per hour (40.2 kilometers per hour). The Wheelsurf is extremely lightweight and it's steered by the driver shifting his or her weight from side to side. Unfortunately, the company says it's not street-legal in most countries -- but it is a lot of fun to be had for $7,000 [source: Wheelsurf].

So as you can see, designers still like to play around with monowheel concepts. One designer, Shaun Stevens, has even showed off his idea for an electrically-powered monowheel-motorcycle hybrid. The design is dubbed the Audi AM [source: EcoFriend]. And while the stylish one-wheeler will likely never see production, it, along with many other modern examples of monowheel design, shows that intrepid designers and engineers haven't given up on monowheels yet.

For more information about monowheels and other related topics, follow the links on the next page.