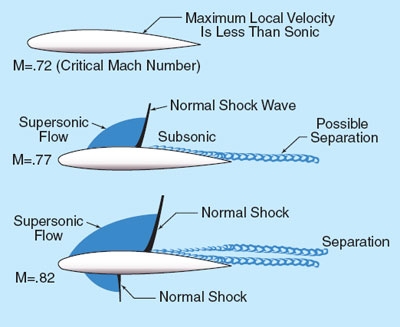 One of the biggest challenges the North American Eagle faces is overcoming issues related to traveling at supersonic speeds. At such speeds (i.e., greater than the speed of sound), the car will produce shock waves that can affect the stability of the vehicle and produce a sonic boom. Let's take a quick look at how these shock waves form and how the North American Eagle will compensate for them. 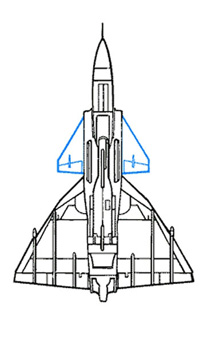 Photo courtesy of the United States Government
Illustration of where the canards are located (in blue).

When the shock waves reach the ground, they can be sensed as a sonic boom. The intensity of the sonic boom is determined by several factors: the distance between the object and the ground, the size and shape of the object, and atmospheric conditions, including air pressure, temperature and winds. Sonic booms have been well-studied in airplanes, but less so in vehicles traveling just a few inches above the ground.

One problem with land speed cars is that the shock waves building up at the nose can create an upward force that lifts the car off the ground. The North American Eagle team has installed canards -- small wing-like projections -- to provide extra stability and control. If you've ever stuck your hand out the window of a car traveling 60 mph, then you have a feel for how canards work. Their angle in the air stream can either create an upward force or a downward force. In the case of the North American Eagle, the system will be controlled independently of the driver by a computer. It will monitor a load sensor on the front axle. The project's testing program will be verifying that the software program on the computer will adequately adjust the canards down slightly to apply just enough, but not too much, down-force to keep the front wheel from leaving the ground and prevent a nose up attitude. 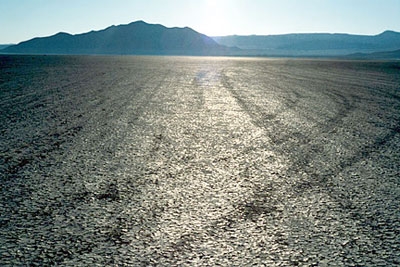 Going for the Record
Of course, having a car that will travel faster than the speed of sound is just part of the problem. You also have to find a place to race it safely -- and to have your results officially measured and recognized as a true world land speed record. In North America, there are only a few places suitable for land speed racing. That's because land speed racers require a long track (as much as 15 miles or more!) of extremely open, flat land. Daytona Beach was used until 1935. Then racers turned their attention to the Bonneville Salt Flats, a stretch of barren salt flats covering about 100 square miles in northwestern Utah. Bonneville was the favorite North American site for land speed racing until 1983. However, the thrust of the jet engine causes the metal wheels to fishtail on the hard salt when accelerating. Also, the distance which now exists is only a total of seven miles due to salt mining over the past several decades, making the track much too short to use. For those reasons Black Rock Desert in Nevada has been used since. Black Rock Desert offers more open space, and, because it used to be the bottom of a lake instead of a saltwater ocean, it causes less corrosion to the cars.

To go for the record, the North American Team will have to transport the car to Nevada and invite officials from the FIA. Then, over the course of several weeks, the team will prepare the vehicle and make a run for the record. An official run consists of two trials, each in opposite directions and averaged. The second run must enter the timed area within 60 minutes after leaving the timed mile area of the first runm to qualify under the existing rules.

The time for each trial is measured along a one-mile stretch called the measured mile. The official time is the average of the two trial times. For example, here is how the Thrust SSC team did it in 1997 when they set the world land speed record:

To break the record set by the Thrust SSC team, the North American Eagle must be at least one percent faster -- or roughly 770 mph (Mach 1.03). So far, the North American Eagle has reached a top speed of only 312 mph, recorded in March 2005, but that was on low-speed aircraft tires rated at 350 mph. With aluminum wheels and afterburners kicking in, the team expects that the car could reach 800 mph. 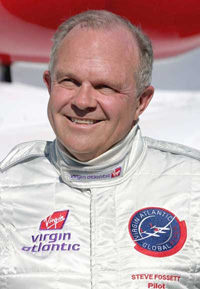 The Race to the Race
The North American Eagle's official run for the world land speed record will have to wait as the team raises more money and finishes tweaking the design of the car. In the meantime, one or two other teams are working on cars that might challenge the record. One such competitor is Steve Fossett; the record-setting millionaire who recently purchased Craig Breedlove's Spirit of America and is modifying the vehicle for an October 2007 record attempt. At a 2006 press conference, Fossett told reporters that he believes his modified Spirit of America can reach speeds of 800 mph.

The North American Eagle, of course, hopes to be first -- and faster. This goes to prove that in land speed racing, the race to the starting line is just as crucial as the race to the finish.