What is the North American Eagle? 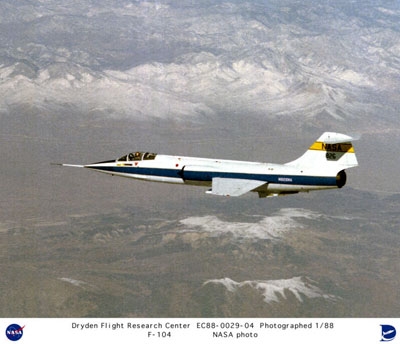 The North American Eagle is a car, but only in a strictly academic sense. It has wheels, an engine, instrumentation and a place for the driver to sit. That's where the comparisons end, however.

It's closer to the truth to call the North American Eagle a jet on wheels. In fact, the car's chassis is based on the fuselage of an airplane known as the F-104 Starfighter. Introduced by Lockheed Corporation in 1954, the Starfighter was the first operational military jet capable of sustained flight at Mach 2, or twice the speed of sound. It was phased out in 1967 in favor of newer planes, but even today the sleek, streamlined jet looks like it was built for speed. Shadle and Zanghi were clearly interested in the aerodynamic qualities of the Starfighter when they bought the decommissioned plane from a surplus aircraft dealer in Maine for $25,000. To convert it into a car, the North American Eagle team covered the wing roots (the wings had already been removed) and added a suspension system. The team also made modifications to a powerful turbojet engine, the same type that propelled the fighter jet to over twice the speed of sound in the air with wings, which the car uses as its source of power.

As you can imagine, the North American Eagle is not a vehicle someone would drive on the streets. Instead, it belongs to a group of cars known as land speed racers. In official competition, land speed racers must adhere to strict rules and regulations established by the Federation Internationale de L'Automobile (FIA), the main governing body of most types of automobile racing. The FIA recognizes several classes of land speed racers, based on their overall design and source of power, and acknowledges record-holders in each. The North American Eagle competes in the Special Construction class, which itself includes three categories: Unlimited Streamliners, Lakesters and Unlimiteds. 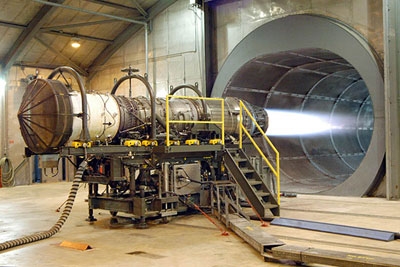 The Unlimited category was developed specifically for vehicles that rely on jet or rocket propulsion to increase speed. Jet propulsion occurs when fuel is burned in the presence of oxygen from the atmosphere, creating a stream of expanding gases that, when expelled through a nozzle, generates thrust. Rocket propulsion is based on similar principles except the oxygen is transported along with the fuel. The North American Eagle, of course, is a jet-propelled vehicle that takes advantage of a General Electric LM-1500 turbojet engine. We'll talk more about the engine in the next section, but you should know that the LM-1500 can produce, in its fully enhanced form, 52,000 horsepower -- almost 375 times more power than the average Honda Civic. 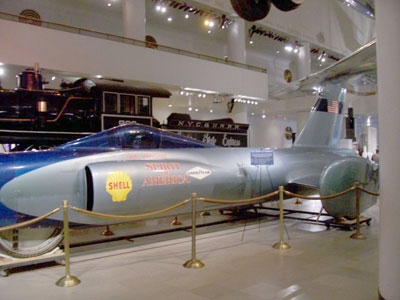 Used under the Creative Commons Attribution ShareAlike 2.5 License.
The Spirit of America at the Chicago Museum of Science and Industry in Chicago, Illinois.

Although anything goes when it comes to thrust, Unlimiteds must meet other stringent design requirements. For example, they can't use any winged surfaces to control the vehicle and must have a minimum of four wheels. Vehicles with three wheels are not considered cars at all and must compete as motorcycles.

Unlimiteds have consistently stretched the limits of land speed since the FIA established the class in 1964. Cars such as the Green Monster, Spirit of America, Thrust II and Thrust SSC raced through the record books, surpassing the 500 mph milestone, the 600 mph milestone, the 700 mph milestone and, finally, the sound barrier, which is 760 mph at a temperature of 15ºC and sea-level pressure. The goal of the North American Eagle is to beat the current land speed record of 763 mph averaged speed — and to become the fastest car ever to race across the surface of the earth.