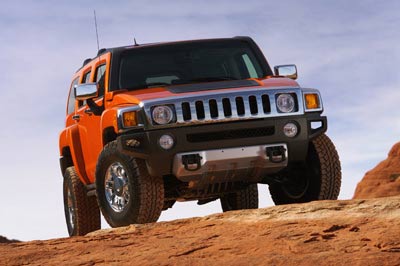 The American public's awareness of the Hummer really blossomed in 1991 as Operation Desert Storm dominated daily headlines and newscasts. For most Americans, it was the first chance to see the Army's Hummer in action. Many were intrigued by its wide, powerful design, and before long people began to ask AM General if it planned to produce a commercial version of the Hummer. AM General's answer was "yes."

In 1992, AM General began to produce a four-wheel drive vehicle based off the military Hummer. They marketed it as "the world's most serious 4x4." The Hummer shared many of its military cousin’s features, including the brake traction control system that gives the Hummer the ability to adjust torque even when a wheel is completely off the ground. Off-road enthusiasts were overjoyed at the prospect of getting behind the wheel of a car that could tackle courses that would scare a Jeep driver. The car's safety rankings were very high -- but you'd probably expect that from a car originally designed for combat missions.

Civilian Hummers use the same chassis as the military Hummer, and AM General even uses the same manufacturing facilities to build them. From 1992 to 1995, the Hummer used a diesel engine (either a 6.2 or 6.5-liter engine, depending on the year). From 1995 to 1997, AM General experimented by producing a model that used a 5.7-liter gasoline V-8 engine. Unfortunately, the Hummer just weighed too much -- early Hummers weighed in at around 7,000 pounds (3,150 kilograms) -- and AM General went back to using diesel engines after 1997.

In 1999, General Motors purchased the right to produce vehicles under the Hummer brand name. AM General would continue to produce the original Hummer, renamed as the H1, under the GM brand name. GM named later models the H2 and H3. Although GM designed the H2, AM General builds the cars in its facilities. General Motors manufactures the Hummer H3 using its own facilities.

Come With Me If You Want to Live

One person who was particularly interested in Hummers was future California governor and former Terminator, Arnold Schwarzenegger. Schwarzenegger's fascination with the vehicle made the news when he first asked AM General to sell him a Hummer. AM General refused to sell a military vehicle to a civilian, but eventually conceded by designing and producing the Hummer. In 1992, Schwarzenegger became the first owner of the civilian Hummer.